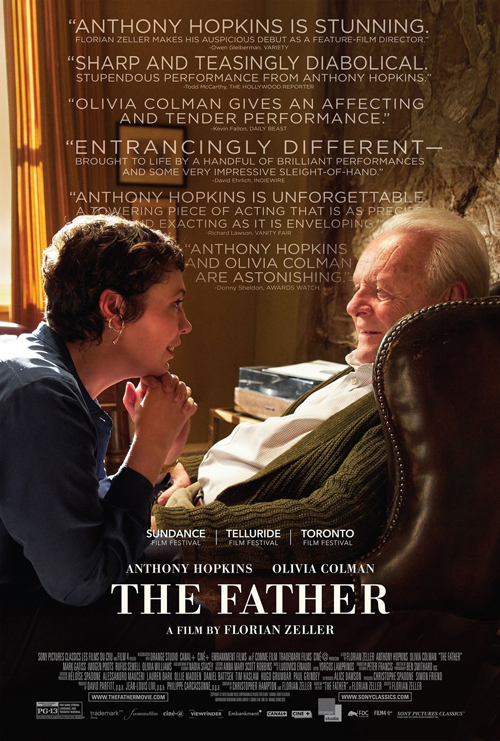 The Father
(2020)
(SPOILERS) I was in no great rush to see The Father, expecting it to be it to be something of an ordeal in the manner of that lavishly overpraised euthanasia-fest Amour. As with the previous Oscars, though, the Best Picture nominee I saw last turned out to be the best of the bunch. In that case, Parasite, its very title beckoning the psychic global warfare sprouting shoots around it, would win the top prize. The Father, in a year of disappointing nominees, had to settle for Best Actor. Ant’s good, naturally, but I was most impressed with the unpandering manner in which Florian Zeller and Christopher Hampton approached material that might easily render one highly unstuck.

The key qualification to the effectiveness of The Father as a piece of cinema, I think, is that it’s clearly the work of someone whose craft is the theatre. It’s this factor, for all that the film is well made, that prevents it from achieving any real added depth or dimension from use of the medium. You’ll doubtless be minded of Polanski’s Repulsion at times, as Zeller places you in the subjective position of Anthony’s progressive dementia, but you’ll rarely feel truly immersed, as you would with someone who truly engages with the possibilities of the form.

There are occasions when The Father’s theatrical origins (Zeller’s 2012 play La Père) are all to evident. And yet, at times, with the almost Pinter-esque sense of dislocation of time and place Anthony encounters (for example, early on when Mark Gatiss’ shifty – is there any other Gatiss? – “intruder” announces himself in Anthony’s flat) the effect is quite palpable and unnerving, because we aren’t yet at a point where we’re keyed into the rhythms of Zeller charting his protagonist’s failing mind. Is Gatiss, perhaps, a housebreaker who has eavesdropped on Anthony’s particulars and plans to take more from him than simply a wristwatch? Even later, Zeller encourages us to question the timings and sequences we’re surveying, so jumbled are the personas and identities of those Anthony knows or doesn’t (and in contrast to a surrealist approach, where this might leave one simply disorientated, there’s never a sense The Father doesn’t ultimately cohere; it’s simply that Anthony is unable to integrate or perceive the elements).

The converse are those junctures where the performative nature of the piece is foregrounded, where Zeller, perhaps inadvertently, draws attention to this being little more than a piece of filmed stagecraft, and you feel you’re being acted “at”. Notable examples include Anthony tapdancing for Imogen Poots’ carer/daughter. Less of a failure of performance, and more of writing, is Anthony slipping into a childlike state and asking for “Mummy”; however sincerely played, it’s immediately a storytelling cliché of diminishment and degeneration.

Another cliché is the family tragedy, and frankly an unnecessary encumbrance to add “mystery” and drama where there’s quite enough already; the most enduringly sinister element of the piece is perhaps that Paul (Rufus Sewell, but amalgamating with Gatiss in Anthony’s mind) may not only have been psychologically but also physically abusing Anthony (certainly, what we see of him “objectively” suggests he’s capable of such behaviour).

Aside from allowing Anthony to grandstand a little too much at times – and obviously, his real Oscar-winning turn this year was his pretending to get the jab on camera – the cast don’t put a foot wrong. Even Gatiss, ever one to cultivate the worst kind of ham tendencies, makes a good fit (although, you wonder at the Royston Vasey qualities of any care home where Bill would be working). In particular, the schism of Anthony confusing daughter Anne (Olivia Colman) with caregiver Laura (Olivia Williams, also Poots) and care home nurse Catherine works because there’s a passing similarity between Colman and Williams. It’s very easy to see Colman’s Anne reaching the point of being unable to cope, and also the seeds that give forth Sewell’s more malignant responses.

There’s overwriting at times; the repeated punctuations of “Paris. They don’t even speak English there” and “How long do you intend to hang around here getting on everybody’s tits?” are very much stage stylings, while “I feel as if I’m losing all my leaves” is a beautiful line, but too poetic for its chosen context. Some of the transitions are superbly achieved, particularly of location (from Anthony’s flat to Anne’s to the care home), such that each progression reflects that, for all Anthony’s initial intransigence (“I’m not leaving my flat!”), he inevitably wilts in the face of failing faculties.

Ludovico Einaudi’s score evokes both Philip Glass and Michael Nyman amid classical cues, lending the piece alternatively a discordant and elegiac quality. It also underlines the inevitability of Anthony’s downturn, a kaleidoscope that will only further fracture. One might suggest creating a puzzle from Anthony’s mental state is itself insensitive on the writers’ parts, but I’d take the view that such an objection ultimately submits to The Father’s ability to inspire empathy for a situation, beyond simply demanding it in a glib “because it’s sad” manner that is Hollywood’s forte. As for the two Oscar wins, they picked correctly on both counts of the options that night (a rare thing), but perhaps more of the attention should have been focussed on the Adapted Screenplay than Ant’s record-breaking aged thesp.

7. Judah and the Black Messiah