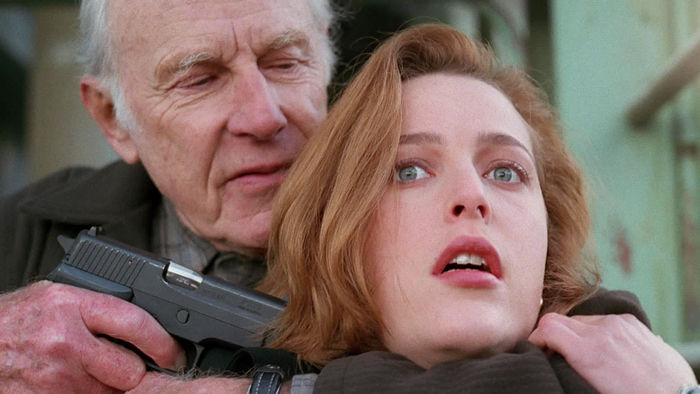 The X-Files
4.9: Terma
Oh dear. After an engaging opener, the second part of this story drops through the floor, and even the usually spirited Rob Bowman can’t save the lethargic mess Carter and Spotnitz make of some actually pretty promising plot threads.

Perhaps the biggest miss is that jacking Mulder full of worms has no repercussions at all. Because the Russkies were developing a “vaccine” to the goo (yeah, I know, good vaccines and the like; whatever next?) We learn that Krycek has been very cleverly playing a duplicitous game, in a manner that would surely beggar belief if I felt it was even worth the effort to painstakingly go back through the logic of this “big setup from the beginning – almost perfectly executed. Someone used Krycek, then Krycek used us… someone who didn’t want that rock in American hands”.

One might draw the parallel between “The first time is bad. Very bad…. It becomes easier each time… Until it kills you” and getting boosters for a deadly virus. The question is, why it kills you if the vaccine “works”? Is it a question of “dosage” of oil? Hoping for clarity here is fool’s errand, however.

Indeed, the problem with Terma is principally that, having set things up, it blows things up. So the retired KGB agent (Jan Rubeš), reactivated, goes around destroying all evidence of its presence in America, which leads to your typically banal big explosion (this time an oil well – last time, actually pretty good, it was an exploding train car). There are numerous ideas that might have been better focussed on, in particular an opening where you might think you’d accidentally switched on the wrong episode, with elderly patients at a convalescence home, until… worms! Then there’s Well-Manicured Man’s horse doctor (Jessica Schreier), whose presence is made especially facile by CSM suggesting WMM’s sleeping with her, and her being dispatched forthwith. Those no real power in even the powerful figures within the Syndicate, and since John Neville is stuck spurting Carter speak, no longer any real punch to the character.

Mulder escapes the gulag, presented with a shiv he promises to use on Alex… and then, of course, he doesn’t, because he’s terribly ineffectual. Instead, driving off, losing his prisoner (Krycek), and control of his truck. Carter and Spotnitz don’t want to stay anywhere long enough to develop any of the ideas, which means they’re almost entirely squandered.

Krycek losing an arm is a suitably grisly moment, admittedly. And the cutting off of limbs, particularly in regard to a vaccine scar, seems to be overtly referencing Apocalypse Now. The aggressive action of the black oil, meanwhile, is quite resonantly designed to remove one’s spiritual connection, “... some type of black vermiform organism attached to the pineal gland”. Hmmm.

Let’s not forget, it renders its victim entirely without freewill and individual consciousness (rather like the idea some are floating of the actual current jabs). The horse doctor is an authority on “variola viruses” who has been “a vocal proponent of eliminating the last remaining stores of the smallpox virus... destroying the only remaining vials in facilities here in Atlanta and the former Soviet Union”. Whether that’s because she knows the whole thing is BS, or because she’s genuinely nursing the mass delusion of the deadly strain, is up for debate, but far from questioning everything, The X-Files always goes the legitimate route with such “established” truth.

Matters naturally catch up with the prologue when Mulder arrives at the Senate hearing (even with Scully’s explanation about lawyers’ motives, the idea that they’d lay this on just to find him is nonsensical) and launches into a typically risible bag of Carterian wind as he waxes lyrical about the injustices of freemasonic cosmology:

Mulder: Why is this so hard to believe? When the accepted discovery of life off this planet is on the front page of every newspaper around the world? When the most conservative scientists and science journals are calling for the exploration of Mars and Jupiter? With every reason to believe that life and the persistence of it is thriving outside our own terrestrial sphere? If you cannot get past this, then I suggest this whole committee be held in contempt, for ignoring evidence that cannot be refuted.

Mulder, of course, is beginning from false precepts, since the front page of every newspaper may intentionally be leading him up the garden path (or astral cul-de-sac). Unfortunately, he trusts just enough to be perpetually hoodwinked when it comes to the grand scheme.

The rock material here has a suitably Lovecraftian – or Stephen King-ian – quality, but it never takes on the exotic or unnerving qualities suggested by the opener. Terma is a squandered opportunity, but that tends to be the mythology arc all over. 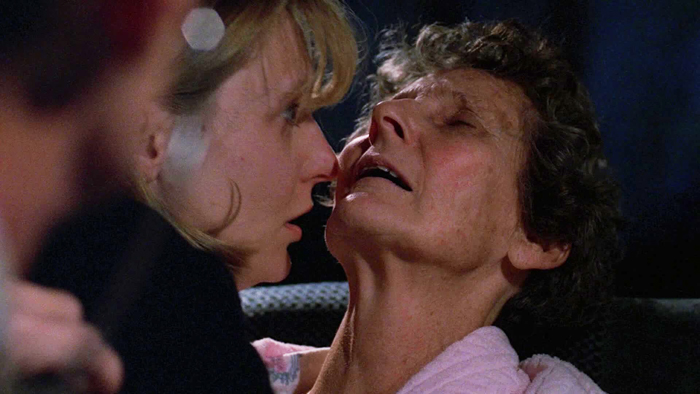 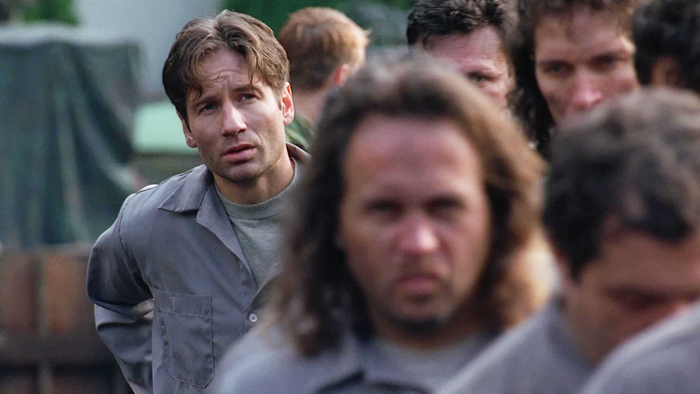 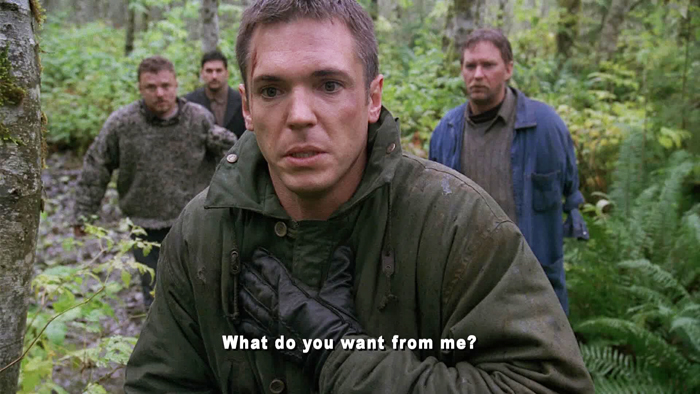 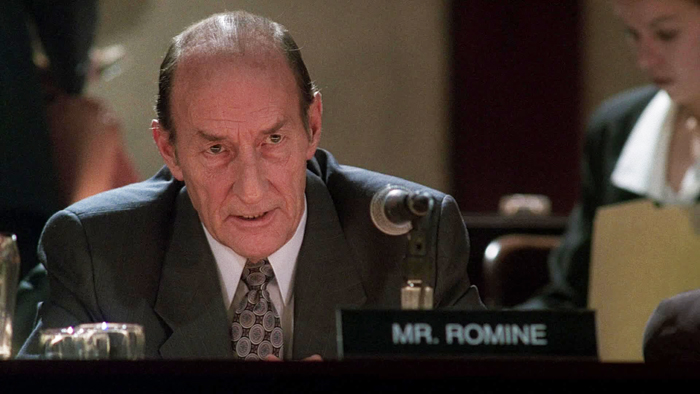 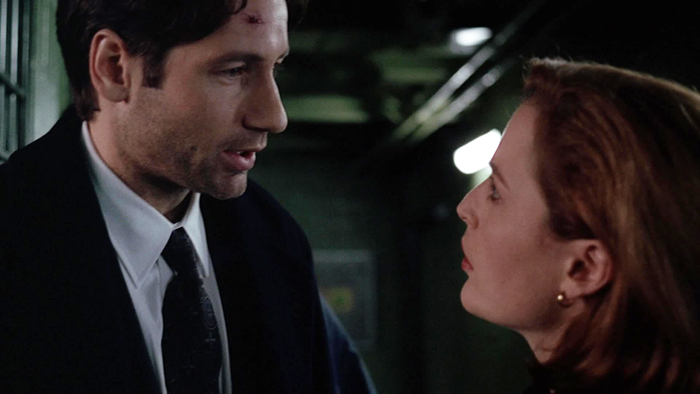 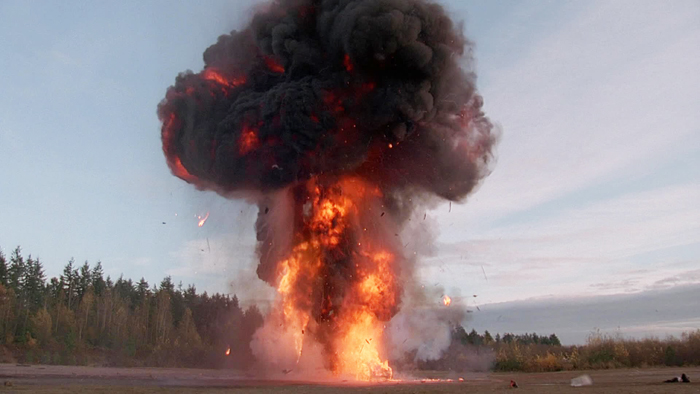 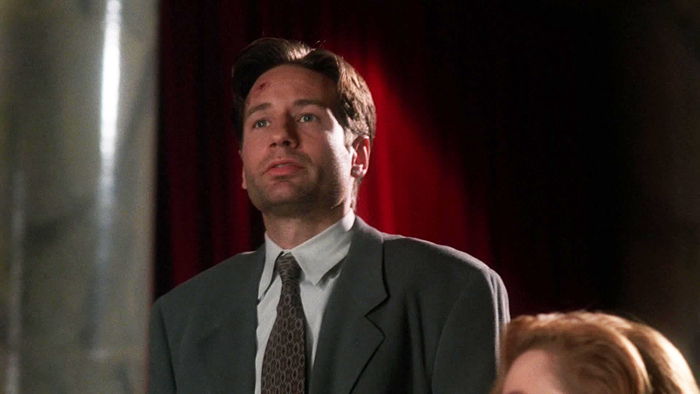