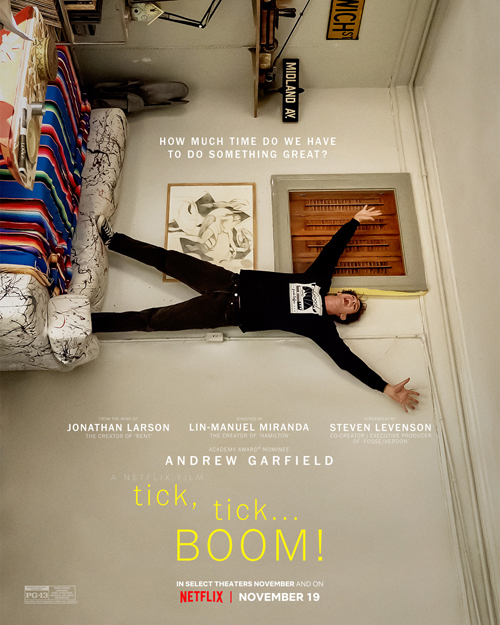 Which is to say, Tick, Tick… Boom!’s appeal was lost on me. I didn’t care for the songs, I didn’t care for Andrew Garfield’s wired, self-obsessed Larson, or the shifts between a self-conscious performative persona and suffocating self-centredness. Most of all, I didn’t care for the journey, resistibly described in the title, of Larson dreading the arrival of his thirtieth birthday because he hasn’t made it, while those he rates, aspires to become, have all achieved great things by that point. You really have to care for a tortured artist to want to be a part of that show, and Larson gives you no good reasons. The musical was nominated by the lately disgraced Golden Globes for Best Motion Picture – Musical or Comedy, but I don’t see it creating any kind of buzz generally, or Netflix talking up its viewer count.

I think I have this right – I don’t know my Larson – that he penned Superbia, putting everything into a “tough sell” futuristic musical epic no one wanted to see; neither has anyone posthumously produced it, although it would be a great title for a Pet Shop Boys musical. From its ashes, he set forth on this more personal solo piece, finished in 1991. It was also unproduced on any kind of scale until posthumously (in 2001). Then came Rent, in 1993, which obviously, went through the roof (the movie version, not so much).

Perhaps director Lin-Manuel Miranda’s magic touch is very much a theatrical one, given this, and the underperformance of In the Heights, and his remarkable acting in Mary Poppins Returns. Solely theatrical acumen may have been Jonathan Larson’s too, on this evidence. Most critics seem to have swooned over Tick, Tick… Boom!, but I was left pondering that someone else, with a more acerbic, reticent gaze, might have made the rocky road to adulation a more engaging one – a Jarvis Cocker musical, perhaps?

Tick, Tick… Boom! translates almost as a parody of the shallow musical and the drama student’s sensationalisation of the mundane, be it the trials of coffee shop life (Sunday Brunch) or a song about swimming. I found it toe curling. I’m just surprised Larson didn’t include a song about the joys of taking a dump. Many have depicted down-at-heel formative years, from Bruce Robinson to Pegg and Stevenson, but it’s usually from a retrospective perspective and best served laced with humour rather than monumental introspection and versatility-swamping ego.

There’s a scene in which Larson’s girlfriend Susan (Alexandra Shipp) breaks off from resuming their relationship on realising the extent of his self-involvement: “You’re thinking about how you can turn this into a song, aren’t you?” she gasps. A few scenes later, when Jonathan is faced with the news that best friend Michael (Robin de Jesús) has AIDS, and the latter breaks into the (relatively) heartfelt, resounding Real Life, we’ve been primed to suspect the self-same cynical consideration. Of which, the capsule sentimentalising of the AIDS crisis is very noble, but it might have been better served by Netflix giving Jon Rappaport’s research a platform, and exposing the culpability therein of one Fauci (obviously, fat chance, but one can dream an impossible dream).

There are occasional positives amid the sea of luvvies. A scene where Sondheim (Bradley Whitford) and the head of a theatre workshop (Richard Kind) are offering Larson notes is great, crackling with humour – Kind continually modifying his critique when Sondheim proffers positives – but it serves to emphasise that Larson on his own is a black hole of a character. Likewise, the first section of the ad-agency focus group, where Larson finds a creative groove, sees the mood lift from the “poor me”, before crashes back into indulgence and a not very good product gag – “Chubstitute” sounds like a George Costanza version of funny.

Garfield won the Globe for Best Actor (Musical or Comedy), suggesting he may have a look-in for an Oscar nomination, and he’s probably no better or worse a choice than anyone else in this mugging, over-affected year (when Cumberbatch is the frontrunner, you know you’re in trouble). And on the subject of performers, I spotted Bebe Neuwirth’s coffee shop cameo. I wouldn’t say Tick, Tick… Boom! outright stinks, as it’s undeniably well made, and the performances are giving it some welly, but the material itself is cold pizza, left on Larson’s kitchen table to fester for weeks.