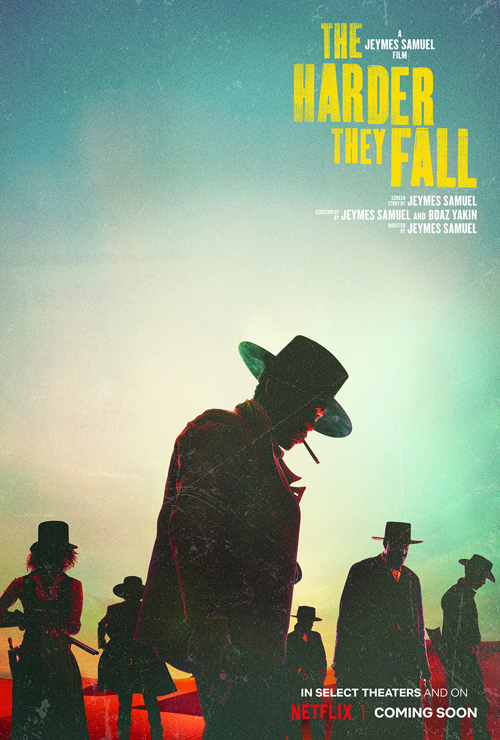 The Harder They Fall
(2021)
(SPOILERS) The revisionist western is a broad church, at its best opening out the genre to new ideas or perspectives while preserving a prevailing verisimilitude. Conversely, it also runs the danger of offering window dressing, with the “serious” commentary of the shallowest and most obvious kind. For the most part, The Harder They Fall amounts to little more than posturing pastiche, taking in historical figures but making no attempt to integrate them intelligently – or intelligibly – with its fictional framework (in the manner of, say, Butch Cassidy and Sundance Kid). The results are closer to something like Jake Scott’s Plunkett & Macleane, with a brazenly clashing score and an accompanying approach to milieu (costuming, photography, dialogue) and performance (everyone has a “I get to be a cowboy for a few weeks!” air about them). I mean, it’s fine for what it is, intermittently, which isn’t very much.

Perhaps debut feature director Jeymes Samuel should have lent in to the absurdity, in the way Sam Raimi upped the ante with The Quick and the Dead. As it is, you’re left wishing many of the more interesting – and previously largely unbroached by cinema – parts of the picture were explored, such as all-black towns that, amid The Harder They Fall’s blunderbuss format, could be mistaken for fanciful. Obviously, Samuel has no responsibility in that regard. But he’s inhabiting a revisionist landscape that is already well worn; you’re left asking what he has delivered that is remotely fresh or distinctive, and soon coming up short.

Indeed, the screenplay is awash with tropes and clichés courtesy of Samuel and Boaz Yakin. The latter, while a seasoned screenwriter, can boast very few tip-top results, which may simply be the luck of the rewrite, Hollywood being what it is. Alternatively, it can signify an Akiva Goldsman. The revenge for childhood trauma is out of Once Upon a Time in the West (and again, Raimi appropriated it for The Quick and the Dead). Only, this time it throws in a shark-jumping fraternal twist that entirely flounders (which goes back to how determinedly superficial Samuel’s affray is).

Many of these tropes follow suit. The sharpshooter. The cocky young gunslinger (RJ Cyler’s Beckwourth is essentially the Leo DiCaprio character from The Quick and the Dead). The ruthless psycho killer (Idris Elba’s Rufus Buck following in the footsteps of Henry Fonda. Elba’s main repose is glowering, of course, so he has that one sewn up). Others are based on kick-ass women (Zazie Beetz’s Stagecoach Mary, Regina King’s Trudy Smith and Danielle Deadwyler’s Cuffee, all shown kicking inherently deserving menfolk’s asses during the early stages). Others still are based on situational reversals of race, albeit the confrontational aspect is largely eschewed, aside from a train breakout and a robbery on a bank in a white town.

Some of these land more effectively than others. The Harder They Fall assumes something approaching momentum once the action settles on Redwood City, where Buck has ousted Wiley Escoe (Deon Cole), the former pal who turned him in. There are some reasonably staged shootouts and confrontations, and if the picture is typical overlong (it’s Netflix), it’s nimbler as it progresses. The cast’s dress-up box quality – Lakeith Stanfield is always Lakeith Stanfield, no matter how leftfield he’s cast – rather recalls Young Guns or Silverado, although those pictures were almost earnest in attempting “authenticity” by comparison. I’ve yet to be persuaded by the general raves surrounding lead Jonathan Majors.

There are praiseworthy exceptions. Delroy Lindo is more than solid as US Marshal Bass Reeves (also mentioned in so-woke-it-hurts Damon Lindelof’s Watchmen). Deadwyler too, despite the alluded-to fisticuffs, is strong. Mostly, though, The Harder They Fall is exactly as slick and empty as it evidently intends to be. Clearly too, per the final scene, it has set itself up for a sequel, which given it seems to have gone down well on Netflix, won’t be at all surprising.