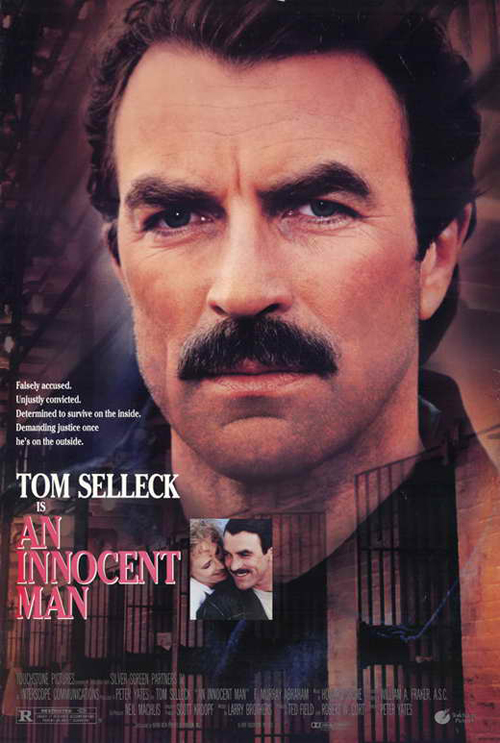 An Innocent Man
(1989)
(SPOILERS) Was it a chicken-and-egg thing with Tom Selleck and movies? Did he consistently end up in ropey pictures because other, bigger big-screen stars had first dibs on the good stuff? Or was it because he was a resolutely small-screen guy with limited range and zero good taste? Selleck had about half-a-dozen cinema outings during the 1980s, one of which, the very TV, very Touchstone Three Men and a Baby was a hit, but couldn’t be put wholly down to him. The final one was An Innocent Man, where he attempted to show some grit and mettle, as nice-guy Tom is framed and has to get tough to survive. Unfortunately, it’s another big-screen TV movie.

By which, I don’t mean an episode of Oz (now, that’s an idea: Tom Selleck in Oz). Peter Yates’ career was at best patchy, beginning on the high of Summer Holiday and proceeding to the zenith of Bullitt. His better movies tended to be the more dramatic (Breaking Away, The Dresser) than those requiring technical acumen or keenly martialled set pieces (The Deep, Krull, Year of the Comet).

An Innocent Man feels like the work of someone entirely disinterested in the material, delivering Larry Brothers’ screenplay in as perfunctory a manner as possible. I can’t say I entirely blame Yates, but underlining the general cheesiness is about the worst way to go. Howard Shore must cop some flak too; for all his genius elsewhere, this score is absolutely hideous, treacly movie-of-the-week pap that begins with Tom’s Jimmie Rainwood proving what an extraordinary aeronautical engineer he is over the opening credits and becomes steadily more indigestible as it continues.

After a couple of cops – a suitably hyperbolic, coked-up David Rasche (Sledge Hammer!) and his partner Richard Young (Fedora in the same year’s Indiana Jones and the Last Crusade) – bust into the wrong house, shoot Jimmie and then cover their tracks by framing him as drug dealer, things are looking up when Jimmie escapes his “crusading cunt of a wife” (Laila Robins) and finds himself incarcerated. A chance for Tom to show his chops! And no way will he wince his way through the experience looking constipated the way Harrison Ford would. But therein lies part of the problem. Even when it comes to dealing with his “problem” – being messed with by a trio of big black guys who are evidently NOT fans of Magnum P.I. and want to make him their bitch – Jimmie’s frustratingly unfazed and gets over shiving one of them with minimum self-reflection and guilt.

After that, his “Mr Rogers of the correctional system” has it easy, and the stubble, the droop tache, basketball and occasional sniffing – was Jimmie using as a part of a subplot that got excised? – and time in solitary show us just what a man he is. And then he’s out on bail, minimum fuss, for a showdown with the nasty cops. The bright spot of the prison sequence is a hard-guy inmate so decent, he’s practically Santa Claus; F Murray Abraham is always worth watching, but even he – “I’ve only been doing time since Jesus was a baby” – can’t make shinola out of this. Even the dramatics of Jimmie killing a guy are only passably compelling.

Jimmie taking down the cops, helped by Internal Affairs officer Badja Djola (the guy Bruce tells the “pimp-looking motherfucker” jokes in Last Boy Scout, before bottling him), is as pedestrian as it gets, and one further wonders the legal ramifications of such a scheme. Tom, being a brutalist now – “It scares me, but I can handle it” – is poised to slit Rasche’s throat when Laila screams “Jimmie!”, and he recovers his inherently noble decency. This is turgid stuff.

Also in the cast are early-stage-incarceration pal Todd Graff (The Abyss), who meets a particularly nasty, immolating fate, MC Gainey (Lost, Justified) and Tobin Bell (Saw). This was 1989’s second big prison movie, following the equally unsuccessful Lock Up (that one had the benefit of evil Donald Sutherland, though; any movie is improved by an evil Donald Sutherland).

One wonders if Disney threw Selleck a bone as Three Men and a Baby had done so well. If so, they were sure not to make that mistake again. Still, lest you thought it was all over for Tom, he still had Quigley Down Under up his sleeve. As for Yates, you can only flop so many times before you just aren’t going to get the calls any more, and next in line was Year of the Comet. If An Innocent Man had been lively super cheese, that might have been something, but it’s just flat and rather silly.