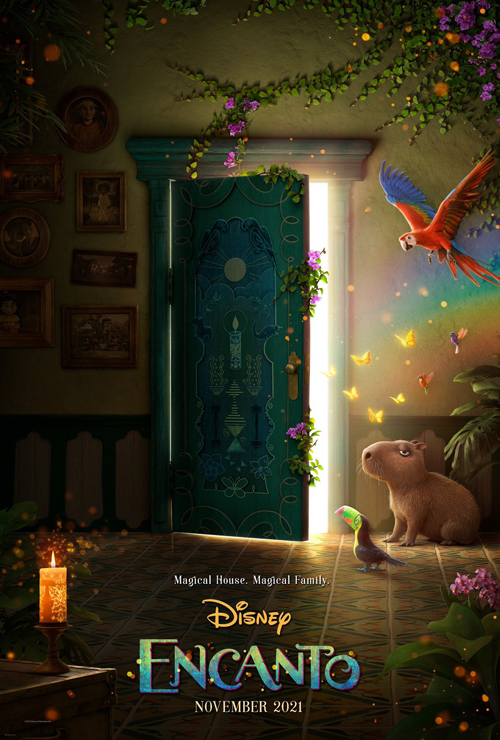 Encanto
(2021)
(SPOILERS) By my estimation, Disney brand pictures are currently edging ahead of the Pixars. Not that there’s a whole lot in it, since neither have been at full wattage for a few years now. Raya and the Last Dragon and now Encanto are collectively just about superior to Soul and Luca. Generally, the animation arm’s attempts to take in as much cultural representation as they possibly can, to make up for their historic lack of woke quotas, has – ironically – had the effect of homogenising the product to whole new levels. So here we have Colombia, renowned the world over for the US’s benign intervention in their region, not to mention providing the CIA with subsistence income, beneficently showered with gifts from the US’s greatest artistic benefactor.

I’ll admit, I had trouble following the gist of Encanto’s message, particularly since Disney usually lays them out in waist-deep treacle. According to the makers, it’s about perspective, “about how you see the other people in your family and how you’re seen”. Erm. This is by way of a rather torturously (feverishly?) conceived premise in which the Madrigal family –their name does what it says on the musical tin – are blessed with amazing gifts owing to a magical candle that also produces an equally amazing house out of thin air. Quite why this should happen is unclear, except perhaps through linking to an underlying theme that immigrants – Alma (Maria Cecilia Botero) and her children fled an armed, doubtless CIA-sponsored, conflict – are themselves a gift. Indeed, I was half expecting the ending to find the family divested of house and abilities, but owning nothing, being happy.

Such Schwab-ian measures are resisted, so that’s a small mercy. But there’s a degree of murk about just what it is getting at. Mirabel (Stephanie Beatriz) has no special skillz (which, on one level, might simply be seen as taking one’s time in life to find one’s calling). She does, however, have an insight into the imminent doom spelled upon the house, and in an attempt to get to the bottom of it, must traverse the issues and quandaries of various family members. These include reconciling with sister Isabela (Diane Guerrero) and confronting her gran’s attitudes towards the family, and her in particular.

The resulting understanding is that neither the house nor the gifts are important, but – as Vin would put it, to Dwayne’s abject indifference – “fam”, and “The miracle is you”. Following this profound insight, however, the house, which has split asunder – a metaphor for cracks in relationships, what have you – is restored to its former all-seeing, all-dancing glory, and everyone gets their mojo back. Encanto’s having its message and eating it too, basically. I guess one might see a Job-ian influence, but it isn’t as if Alma’s offspring were savagely slain. That would be a little strong for an at-times wearisomely upbeat air, complete with Lin-Manuel Miranda penned tunes.

Indeed, there were points where I felt like I was watching a take on The Addams Family with no edge. However, all is not lost. While Encanto’s a movie with a laborious first act and a rote third one, the middle section is really rather good. It’s the quest narrative, essentially, as Mirabel seeks out the source of the abode’s affliction, which involves tracking down family seer Uncle Bruno (John Leguizamo, always at his best when you can’t actually see him).

En route, she must consult super-strong sister Luisa (Jessica Darrow), eliciting the song Surface Pressure, rendered complete with amusing flying donkey unicorns. There’s a tower climb, up there with the best animated sequences the studio has produced; also featuring is Alan Tudyk reliably voicing a daffy toucan. There’s a superbly choreographed dinner scene, in which Mirabel is unable to keep a lid on a whispering campaign revealing the truth she has unearthed. On the animated animals front – they’re all much more agreeable than the humans and used all-too sparingly – there’s a first-rate Capybara, a company of rats sharing accommodation with Bruno, and some versatile coatimundis.

Noe of which is enough, though. Directors Byron Howard (also Bolt, Tangled) and Jared Bush last shared a co-director credit on Zootopia, and this isn’t a patch on that pic. Encanto has been vaunted as the best-performing animated flick of the plandemic, but that still amounts to a meagre $216m gross for a movie reported to need double that to break even (but then, Disney+). Still, its soundtrack topped the US Billboard Chart (whatever that counts for these days), and We Don’t Talk About Bruno has been a Top Five hit (whatever that counts for these days).

Deadline suggested “the box office seems to think it’s Coco all over again at Thanksgiving, and that the materials didn’t distinguish or set Encanto apart enough from its predecessor” which may suggest distinctive and delineated cultural representation can seem much the same to inherently racist audiences. Or simply that all Disney product looks increasingly the same, whatever nominal moves they make to suggest it is otherwise.