I could suck you right up my tailpipe. 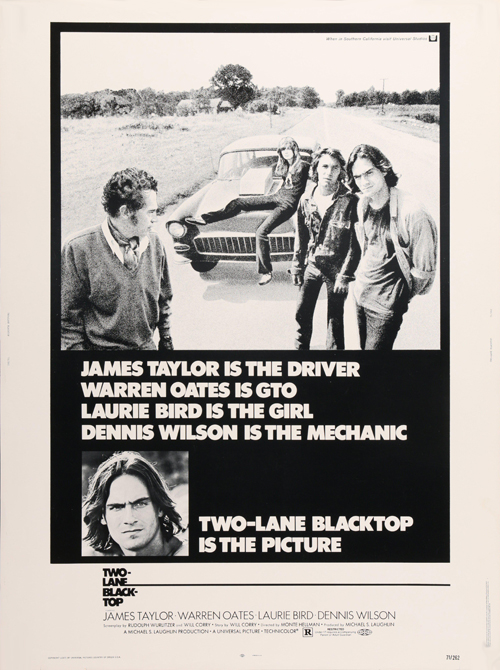 Two-Lane Blacktop
(1971)
(SPOILERS) For a movie with speed as its driving force, at least ostensibly, Two-Lane Blacktop is remarkably meandering. It’s one of those counter-culture classics I never had much urge to investigate, and that reticence appears entirely warranted. It’s a capsule curio, passingly interesting, lightly engaging, but never in danger of earning the praise and attention lavished on it at the time.

Indeed, the picture was at the vanguard of New Hollywood, of short-lived freedoms – carte blanche, even – in the wake of Easy Rider bewildering execs with its unprecedented success. It’s thus expectedly non-conformist in respect of script, character and direction. Lew Wassermen (he of Brazil) hated it and reputedly wouldn’t splash out any advertising dollars (this was the spell that generated the likes of The Last Movie, The Hired Hand and Drive, He Said, all commercial failures).

Monte Hellman’s career was eclectic to say the least, his post-Corman cachet (this and Cockfighter) subsuming into B-exploitation fare and the occasional AD work (Robocop) or producer credit (Reservoir Dogs). Screenwriter Rudolph Wurlitzer meanwhile, brought in to rework Will Corry’s story, would be similar untutored, with Walker (from the very definition of undisciplined, Alex Cox) and Little Buddha (one of Bertulocci’s bigger busts) on his call sheet. Talking of Cox, his Moviedrome introduction to the picture (in August 1989) referenced Wurlitzer’s overarching theme, that “you can’t escape whatever you’re trying to escape from, and the lesson of the road is that there is no lesson of the road”. Which sounds like something Peter Sellers’ Fellini-spoofing film director would have come up with in After the Fox.

And the cast they assembled, James Taylor’s only movie role proper as The Driver, Dennis Wilson – the Beach Boy who fell in with Manson, then later drowned – as The Mechanic, and Laurie Bird – an ingenue who’d OD on Valium at the other end of the decade – as hitcher The Girl, is offbeat to say the least. They offer a low-key naturalism – often minimalist on the musicians’ part – contrasting with Oates’ flamboyant goofing as GTO, the Pontiac GTO driver who challenges the pair to a race in their Chevrolet 150 (I say that like it means something to me – it doesn’t).

The names Driver, the Mechanic and the Girl – and GTO, really – as well as suggesting a certain Walter Hill movie a few years later, indicate a degree of pared-down iconography, something Ebert was evidently referencing when he claimed GTO was “the only character who is fully occupied with being himself (rather than an instrument of metaphor), and so we get the sense we’ve met somebody”. Which is true enough. Taylor is a presence, but offers no personality, while Wilson barely registers much of the time. Bird’s restless waif offers more vitality than the pair of them together, and she seems to spend half her time napping.

Oates meanwhile, is a jovial yarn spinner. Rather like Heath Ledger and his facial scarring in The Dark Knight, but in respect of an auto, he offers a different account of himself and his motor to every new person he encounters, occasionally meeting resistance (the Driver tells him “I don’t want to hear about it… It’s not my problem"), or outright rejection (“I said stop the car” instructs AJ Solari’s Tennessee Hitchhiker, registering something very off-beam about GTO’s freeform rambling anecdotes). There’s even an instance of GTO being tested, as Harry Dean Stanton’s gay Oklahoma cowboy gets fresh with him.

So it’s a curiosity. As a race (announced as such, to Washington DC), it’s nothing. As a road movie, I’ll take the same year’s Vanishing Point (also very much of its moment) or Duel any day. It’s clearly an influence on later lo-fi movies, as Richard Linklater, a big fan, affirms (“To watch this movie correctly is to become absorbed by it”). Yeah, okay. Well, pardon my incorrectitude, dude.