It’s not a question of losing my nerve. I never had none. 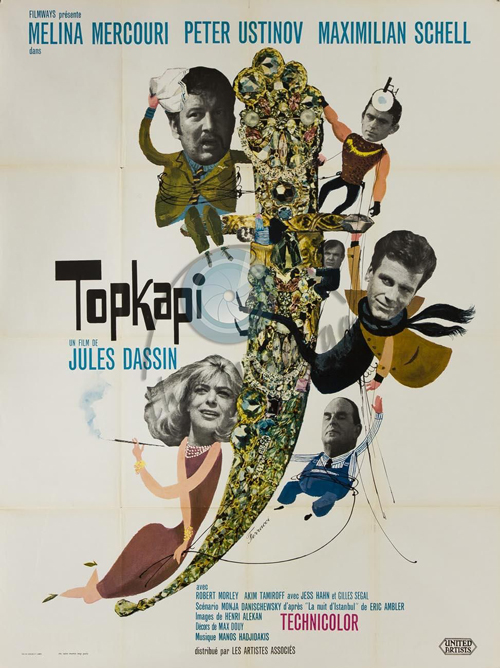 Topkapi
(1964)
(SPOILERS) Good heist movies are hard to come by. Audiences are so starved of them, even dreck like the Now You See Mes does well. Jules Dassin was no slouch in the genre, having already wowed audiences almost a decade before Topkapi with Rififi’s silent, half-hour heist sequence. This is much more a caper than it is a hard-bitten crime movie, though, completely with jaunty comic turns and a very relaxed – sedate, even – approach to unfolding its tale. When it comes to the main set piece, however, it more than delivers.

It’s a long time since I’d last seen Topkapi, such that the same thing occurred to me this time it did last. That it might have been as effective to have the gang get away with it, only to discover super-athletic Giulio (Giles Ségal) inadvertently muddled the real dagger with the fake one when he nearly toppled the statue; the finale seems to be set up for the audience to reach that conclusion, so it works as a misdirection of sorts. Albeit, it’s abundantly clear that, once the bird gets in, it’s going to trigger the alarm.

The entire sequence unfolds with controlled precision, from the sweaty, clumsy, vertiginous rooftop behaviour of impromptu strong man Arthur (Peter Ustinov, winning his second Best Supporting Actor Oscar in half a decade) to the incredibly tense, Mission: Impossible TV and Mission: Impossible (1996) Tom Cruise acrobatics inside the strong room. Dassin juggles the elements with deceptive ease. Monja Danischewsky, formerly of Ealings, furnished the screenplay, an adaption of Eric Ambler’s 1962 novel The Light of Day (this was told from dupe Arthur’s point of view, so requiring some extensive retooling for the movie, where we know the scheme from the outset).

The sequence preceding the heist, in which, for some unknown reason, everyone is riveted to a coterie of oversized, greased-up men going at, is also first class, the team’s departure to meet their date predicated, rightly, on the assumption of the police being exclusively distracted by the Turkish wrestling to pay them due attention. And the flies in the ointment, most notably Hans (Jess Hahn) injuring his hands due to his feud with drunken cook Gerven (Akim Tamiroff), makes for some sure-fire tension, along with Arthur letting slip that he’s working for the Turkish Customs.

It has to be said, though, that despite certain strong touches – employing amateurs – the scheme Walter (Maximilian Schell, looking very young and Daniel Day Lewis-y) and Elizabeth Lipp (Melina Mercouri) devise leaves a few things to be desired. The whole idea of smuggling the car into Italy loaded with guns and bombs is foolhardy to say the least, and later having Arthur lower Giulio without a preceding practice run was bound to yield the results it does. Still, though.

Topkapi boasts a colourful cast. Robert Morley is wholly (and I mean wholly) inimitable as Cedric Page. Ustinov inevitably walks away with the entire movie, although ironically, he was nearing the point where he could no longer slip into a cast like this: too large a character for anything but the broadest comedies or smallest cameos. It seems Arthur was earmarked as a Peter Sellers part, just as Clouseau was a Ustinov one, but Sellers, the weirdo, ducked out of working with Schell. Because Schell was too difficult (this from the man whose bad behaviour later got him canned from Casino Royale). Ustinov may have been hugely witty, erudite and charming, but he was also an unabashed globalist, illustrating how hard it is to come by true smarts.

Mercouri is the ostensible lead and instigator of the plot. We see her breaking the fourth wall at the beginning, singing some gubbins about emeralds; it has to be said, she’s quite resistible, helping to ensure the first few minutes are rather off putting, so very convinced is Topkapi of its inimitable, eccentric appeal. Dassin would go on to marry Mercouri, but this immediately smacks of the kind of movie where the filmmaker insists, in a fit of nepotism, upon casting his missus despite warnings otherwise. Making Elizabeth a nympho kind of works, because her simply being overpoweringly alluring is too much of a stretch.

Perhaps most curious is Topkapi using an actual jewel and its actual site; it strikes one as rather tempting fate, no matter how sensitive Dassin was to the palace’s security. Obviously, under such circumstances, it’s even more vital that justice is seen to be served, even if our cheerful felons are seen reteaming over the credits in order to chase after the Romanov jewels. Come the end of the decade, Michael Caine and his pals would go that one step further, but still not quite get clean away. There really ought to be more heist movies. Just preferably not ones starring Lex Luther-lite. 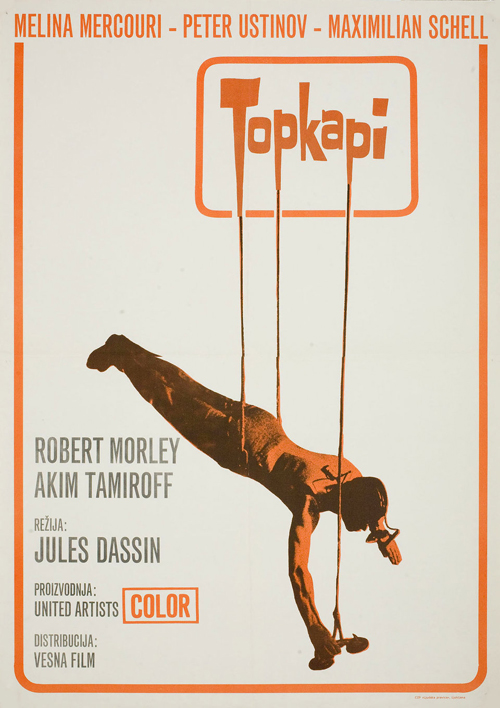 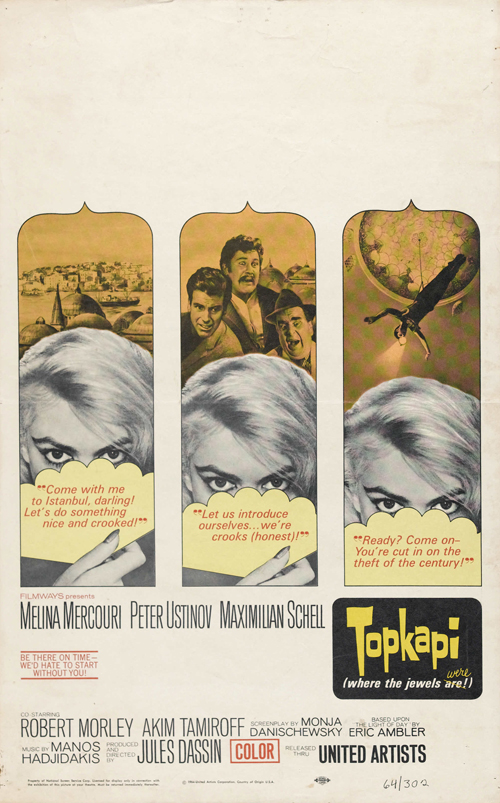 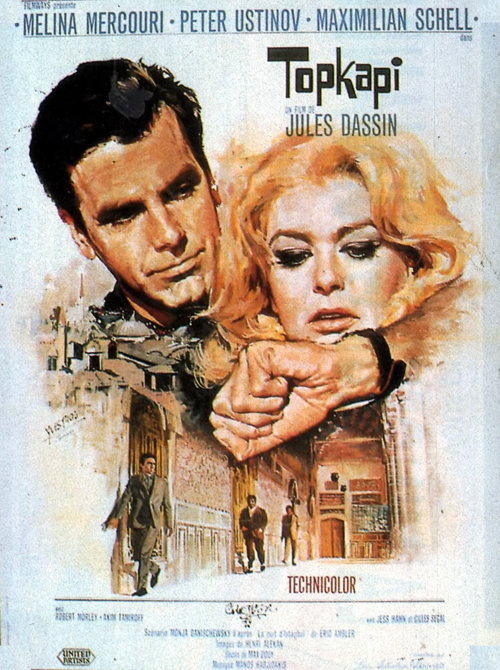