The dinner scene is inarguably better. 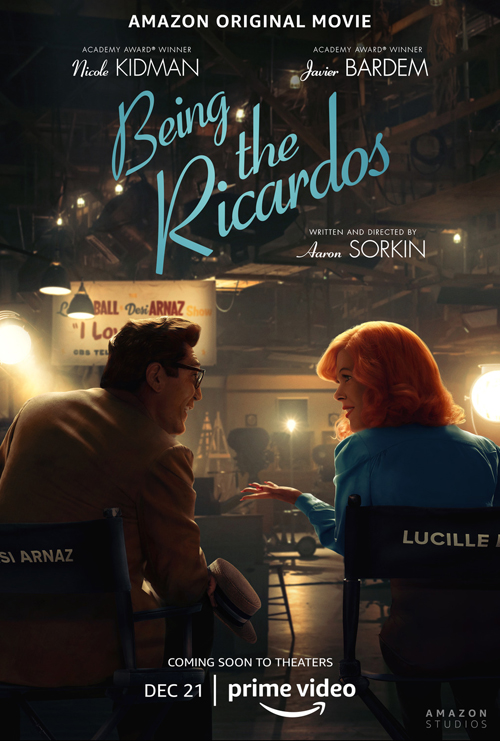 Being the Ricardos
(2021)
(SPOILERS) Being the Ricardos would still be a structurally sloppy, unearned biopic from Aaron Sorkin had Nicole Kidman heeded the backlash against her casting and quit, but it might also have lucked-in with someone better suited to inhabiting Lucille Ball’s persona (Debra Messing has been suggested). As it is, there’s an empty husk at the heart of the movie, not helped any by the terrifying polish Kidman’s given to her already plastic-enhanced face; it makes her look more like Judge Reinhold – or something Bruce Campbell’s Surgeon General of Beverly Hills spat out – than Ball.

To my ear, she approximates the Ball voice reasonably well, but I’m not sure where this idea Kidman has comic chops developed (To Die For, I’m guessing; if so, she’s since presented a compelling case against with the likes of The Stepford Wives and Bewitched). There needs to be some degree of warmth and vitality if you’re even going to think of bringing Lucille Ball to life (and generally, I’d suggest it’s asking for a kicking, trying to imitate a comedian or comedienne).

Kidman has none of that. Where she tends to score is in cool, icy, brittle parts (you may have guessed, I’m not a great fan). Her stardom has been fairly persistent, despite never proving herself a box-office draw, and her popularity with critics has been likewise unassailable. Nothing seems to have dented her (see her controversial dad, her controversial ex-husband, her controversial facial adjustments). Certainly, whatever she’s got is enough for the Globes to throw her an awards bone.

In fairness, I’m unconvinced Javier Bardem really works either, unless you want his hapless Desi Arnaz imbued with the air of one about to take his co-stars out with a bolt gun. That’s fine for the moment when he’s threatening Tony Hale’s showrunner Jess Oppenheimer. Not so fitting as the swoon-worthy band leader or hapless comedy husband. As a consequence, nearly everything focussing on one-on-one scenes between the couple, their tempestuous marriage, pregnancy or flashbacks, flounders.

Fortunately, there’s also the behind-the-scenes, production story. I have no particular interest in I Love Lucy or Ball and Arnaz – I didn’t grow up in a country where it was constantly on air – but Sorkin knows the fraught process of putting together a hit TV show, and the movie intermittently comes alive when the writers and producers are the focus. The aforementioned Hale is on great form, as is his Arrested Development co-star and Brad bezzie Alia Shawkat as writing staffer Madelyn Pugh (Shawkat gets many of the best lines, and is a master of the deadpan putdown). Sorkin attempts an added layer of fiddling by punctuating the action with reminiscences from their older selves, except they’re also played by actors (including Ronny Cox).

JK Simmons and Nina Arianda are also strong as the Arnazs’ co-stars, both having the advantage of being seasoned comedy performers and so a natural fit for the material. That said, they’re not going to make hay replaying famous comedy sequences from the show; even the intentional naffness of WandaVision is funnier than anything Kidman and Bardem can muster.

Sorkin has compressed the key elements of his plot into the space of a tumultuous week, so juggling a narrative tension between a story breaking about Lucille’s alleged commie affiliations, Dezi cheating on her, and the writing of her pregnancy into the show. None of this is very elegant, particularly with the large, often arid chunks devoted to flashbacks in which the fifty-plus thesps attempt to play thirty (or even twenty)-plus versions of their characters. A couple of these stand out, such as RKO axing Ball’s contract (this is largely baloney, as it was amicable and she was 31, not 39).

He also attempts to conjure some kind of magical Miss Marple or A Beautiful Mind creative genius in the comedienne, cutting through any problematic funny business to see the gleaming answer. Frankly, whether or not there’s any truth to such a skillset, it plays rather ridiculously. But Sorkin’s always one for the awkwardly emotive or inspirational, such as having Simmons’s William Frawley asking Desi about his Cuban experiences (“I get plenty scared”), or the final announcement regarding the charge against Lucy, to rapturous crowd response, as Hoover comes on the line to confirm her innocence (this is odd too, not only because Hoover did no such thing, but because using him to validate her ought to be the sort of thing Sorkin, dyed-in-wool liberal that he is, would run a mile from).

I shouldn’t think Being the Ricardos is going to appeal to I Love Lucy fans, as Kidman’s walking uncanny valley can only besmirch her memory. And it certainly has no broader appeal to anyone outside the States, with zero knowledge or interest in the subject matter. Which rather leaves the awards circuit. So yes, it won’t be a surprise if Kidman’s less-than-fantastic, plastic mug shows up everywhere when the Oscar nominations are announced.