You know, this is what happens when people spend too much time in Florida. 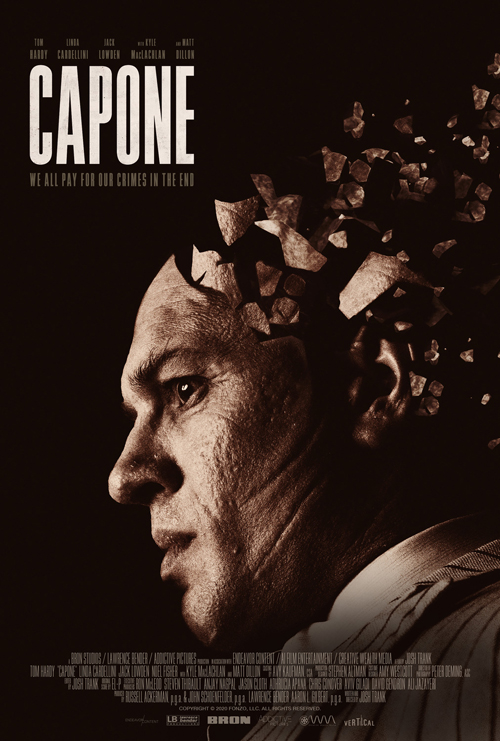 Capone
(2020)
(SPOILERS) Watching Capone, one can’t help but wonder if its title character’s increasingly addled state represents some level of semi-autobiographical statement on the part of its writer-director. Josh Trank was, after all, purportedly stoned out of his gourd while making The Fantastic Four, so precipitating that debacle’s torturous production and legacy (I should stress, I don’t think the picture is nearly the disaster it’s made out to be, even if going grimdark on one of Marvel’s most upbeat properties may not have been the most considered take). Capone delivers a not dissimilarly unwelcoming, albeit syphilis-riddled disposition, as if Trank really wants to dig in to his uncommercial acumen; it’s baffling that any financier figured this was a good prospect. Nevertheless, the picture is fitfully engrossing, and it offers a typically dedicated performance from Tom Hardy.

Hardy comes unsurprisingly laden with layers of makeup, hair and mannerisms, including a voice that sounds “like a dying horse”. As Al Capone, in the last year of his life (aged 48), he’s losing all cognitive abilities along with bowel control (much of the proceedings is consumed with Fonse – the working title was Fonzo – voiding himself amid conversation of his adult diapers). He’s also hallucinating wildly, long stretches of the movie comprising Al in his own world; one can only speculate on the exotic substances Trank may have ingested while coming up with Capone, but he’s clearly all-in for his title character’s journey inward, complete with a claustrophobically suffocating score/soundtrack from El-P, lending the Florida sunlight an oppressively woozy, brain-fog quality.

There’s a semblance of connecting tissue as Al defecates uncontrollably and strokes out and has his cigars substituted for carrots (“What is he, fuckin’ Bugs Bunny? He’s going to go on a fuckin’ rampage!”). The FBI, led by Crawford (Jack Lowden) are trying to get the lowdown on wherever Al may have stashed an apocryphal $10m (Capone suggests it was in his favourite statue; additional funds were never recovered). They enlist his personal physician (Kyle McLachlan) to that end, but to no avail. During his blurry adventures, Al doesn’t shoot an alligator (“You fuckin’ bum. That was my fish!”), and doesn’t take visits from Matt Dillon’s Johnny (possibly Johnny Torio), whose brutal demise haunts the former mobster. He also doesn’t lay waste to half his entourage with a gold-plated tommy gun (but does shoot a gardener in the leg).

The movie is on a hiding to nothing, really, but I’m perfectly willing to stick by the assessment that Trank has a lot more talent than most of those getting regular (often superhero) gigs. Possibly/probably sinking not swimming in Hollywood’s sewer is a sign of creative flow, however artificially augmented. The tommy gun sequence is particularly striking, as is the screening of The Wizard of Oz (“Yeah, but that Emerald City is wide open” protests Johnny of the lion leaving for the forest). And then there’s his calling the police (“I think I may have been kidnapped”).

Hardy is, of course, immensely watchable, keeping the proceedings engaging throughout its distracted longueurs. His performance is by turns funny, intimidating and extraordinarily indulgent, but you never begrudge him it. The habitually underrated Linda Cardellini provides sterling support as wife Mae. Capone looks rich and vivid courtesy of DP Peter Deming; no blue/green/grey colour washes here. Trank’s movie may do its best to resist audience adoration, but the glaze of dark-ambient stupor reveals one of its year’s more interesting pictures, as conceptually flawed as it is.