I always knew you was a born mentalist. 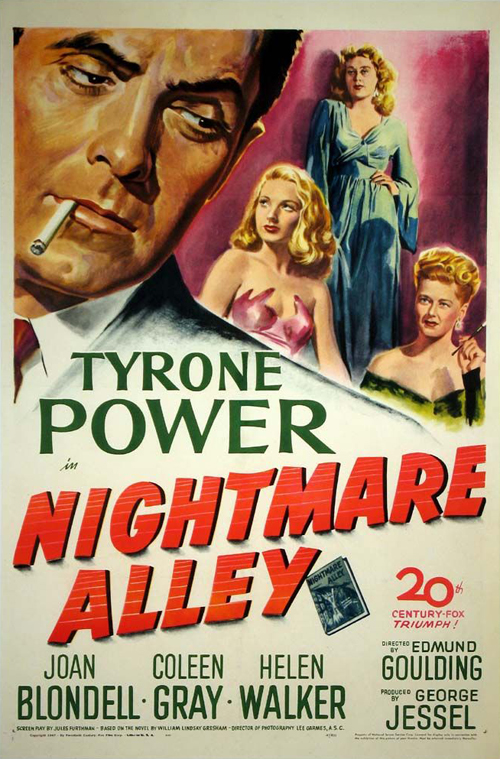 Nightmare Alley
(1947)
(SPOILERS) Watching this after the recent Guillermo del Toro Nightmare Alley wasn’t perhaps the fairest measure Edmund Goulding’s noir, but I wanted to give the new one as much leeway and bring to it as few preconceived ideas as possible. Del Toro’s film is undoubtedly much more polished and much bigger on detail, and it’s also more dedicated to seeing William Lindsay Gresham’s novel through to its unadulterated conclusion. Yet Goulding’s picture remains the more effective of the two, despite its clumsier dialogue and need for exposition; del Toro can’t help but underline advance warning of every development in bold type, undermining the whole and turning his take into a protracted slog on its way to a foregone conclusion. This Nightmare Alley is blessedly lighter on its feet.

The casting helps too. Tyrone Power doesn’t have the talent of Bradley Cooper, but he’s more suited to the part of Stan Carlisle, believably baffled, blithe and debonair. If the scene in which he persuades the police chief of his powers and insights is less convincing, as is his act generally, he conveys the quick learner well, one not necessarily informed but who will be; Cooper just seems perma-crafty. Power’s Stan could feasibly not have heard of the tarot, and unselfconsciously and shamelessly admit to “Never thinking about anybody but myself”. The signature line “I was made for it” is also a much better fit without del Toro’s telegraphing, as Stan first says it of the carnival act, then of the spook racket, and finally of being the geek.

Helen Walker’s Lilith presents less obvious conniving than Cate Blanchett; there’s less baggage to her performance, such that, when the veil drops, she seems much starker and harsher. Admittedly, Coleen Gray is rather a non-event as Molly, and her unprompted admission of guilt when conjuring fakery before Grindle (Taylor Holmes) is a poor show: “I can’t stand it! I can’t stand it! I’m Stan’s wife!”

The immorality of the deceit is also, perhaps inevitably given production codes of the period, tackled more directly. This is a positive, though; there’s so little variation of tone in del Toro’s movie, it’s suffocating. Stan scoffs at warnings he shouldn’t pursue the spook act (“You think God’s going to stand for that?”); It’s just another angle of showbiz. Direct allusions are made to his taking the position of one interposing himself as an intermediary or medium; “When did I ever talk like a minister?” His comforting Grendell with “You don’t know it, but you’re praying right this moment” is more convincing than any of Cooper’s soothing utterances. This is probably a conscious echo of the novel, where Stan proceeds to pass himself off as a spiritualist preacher.

We learn Stan has received $150k from Grendell – about $1.8m today – and yet he still goes ahead with his dangerous scheme. The picture also places emphasis on the tarot – per the 2021 movie, identified as yielding legitimate harbingers – despite Stan’s dismissiveness (“What do I care what the card says?”) On this occasion, the cards are thrown about the room, and The Hanged Man has to be retrieved from the floor. In the novel, each chapter was represented by a different tarot card.

Goulding’s only serious digression from the novel (and the del Toro adaptation) is the ending. Stan accepting the role of geek – “Mister, I was made for it” as opposed to Cooper’s “I was born for it” – is followed by a commotion as “The geek’s gone nuts!”. Molly, conveniently at the same carnival, brings him to his senses, and they are reconciled. Unlikely, maybe. Cop out, perhaps. But I’ve no problem with it. Del Toro’s fundamental error is that you don’t care what happens to Stan. Goulding and screenwriter Jules Furtham (The Big Sleep, Mutiny on the Bounty, To Have and Have Not) allow for a little more empathy.