I stick to modest goals. 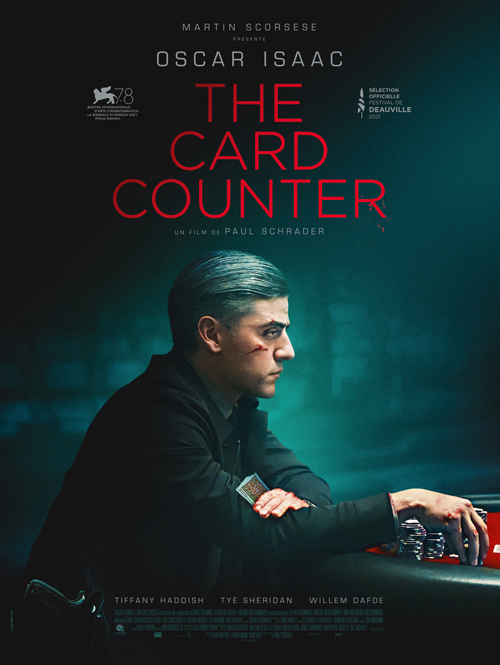 The Card Counter
(2021)
(SPOILERS) A silly and contrived Paul Schrader picture, which shouldn’t be a great surprise coming off the back of the grossly overrated First Reformed. Once upon a time, Schrader penned an all-time-classic screenplay (turned into a all-time-classic movie) about a veteran who drove a taxi around scum-ridden NYC. Now, he’s penned a turgid-and-forgettable screenplay about a veteran who counts cards for a living, having spent eight years in military prison for crimes committed at Abu Ghraib, and who takes under his wing the son of another soldier, who was prosecuted and committed suicide; the son plans revenge on the major who oversaw said prison. It’s a convolution of unwieldy elements, ones that fail to mesh in any coherent manner as Schrader overlays his usual Calvinist guilt tics on The Card Counter while straining for social relevance.

It’s easy to forget, since First Reformed rather rehabilitated his stock, that Schrader’s output has been largely derided for the best part of two decades (Auto Focus was his last prior movie to garner broad approval). The idea that he should suddenly have raised the bar of his material – especially if you found First Reformed an indulgent slog – is not one that yields much interrogation. And so it proves. Schrader has a reputation for delivering strong characters, so it’s unsurprising he can attract the likes of Oscar Isaac, even for such a modestly budget affair as this. However, if The Card Counter wears its limited budget on its sleeve, its real shortfall is in the writing.

None of the interactions in this world seem remotely plausible or relatable. Had Schrader succeeded in furnishing his artificial casino world with a heightened, interior, claustrophobic atmosphere, that might have been partially conducive to these unlikely encounters and relationships. Instead, there’s a stultifying flatness that emphasises both the characters’ absurdity and the often-rudimentary approach to dialogue and motivation.

Isaac’s William Tell is presented as a projected persona, a Schrader substitute, with his rigid code (“I prefer to work under the radar”) and monastic existence; the character and his world are ripe for investigation, if only the writer-director had been willing to spend the time and investment. Instead, he chooses to grapple with a subject with even less cinematic currency than when it was a decade and a half ago, when it was still immediately topical. By all means disinter the US’s War on Terror tactics, but if you do, bring something to the table. Schrader has no insights here, other than the obvious (it’s appalling and obscene).

Worse, he resorts to cartoonish sketches as he tries to bring these crimes to life. The prison-set torture flashbacks are characterised by an omnipresent, over-employed fisheye lens. Willem Dafoe’s leering, moustachioed Major Gordo is a despicable cartoon who gets what he deserves (“I’m going to put you on the night shift. That’s where the good stuff happens”).

William charts a consequently hackneyed journey through guilt and penance to redemption, as a divine instrument of justice and retribution; Schrader is seen to affirm the righteousness of his eye-for-an-eye action at the conclusion (and for this, God gives William his reward: Tiffany Hadish. I’m not sure if that’s back-handed, but still).

The subplot of Tye Sheridan’s Cirk is ungainly and awkward; he’s a character introduced to yield risible exposition (“The apples weren’t bad. The barrel they are from is bad”). That, or invite equally risible insights from the haunted William, who feels some degree of responsibility for Cirk, who insistently resists any sympathetic perspective. One almost senses Schrader wrote the character into the screenplay and then, finding nothing valuable for him to contribute, was stuck with the decision.

There’s a consistent sense of clumsiness throughout. Schrader has Cirk playing heavy-metal music in the car so William can admonish his insensitivity (“If you’d ever actually been there, you’d never want to hear that shit again in your life”). I mean, surely Cirk would have been aware of this, had he really done the research he claims (scan even a brief precis of Abu Ghraib and you’ll be aware of the techniques employed). That’s characteristic of the writing, though; William tells La Linda (La Hadish) “What they don’t like are players who count cards and win big”; why does she need explaining how card counters operate, if she’s from his world and runs a stable of gamblers. It’s sloppy. And Haddish doesn’t seem like any kind of seasoned businesswoman (credit to her super-long nail extensions, though: my only response during the “touchingly” held final shot).

Schrader was given cause to take a swing at the quality of Clint’s Cry Macho for its out-of-touch sensibilities. A tad rich, given he’s clearly making movies about the same characters he was in the 1970s, only with the “polish” of crude socio-political relevance. The Card Counter’s attempts at depth serve only to emphasise how shallow and artificial the movie is.