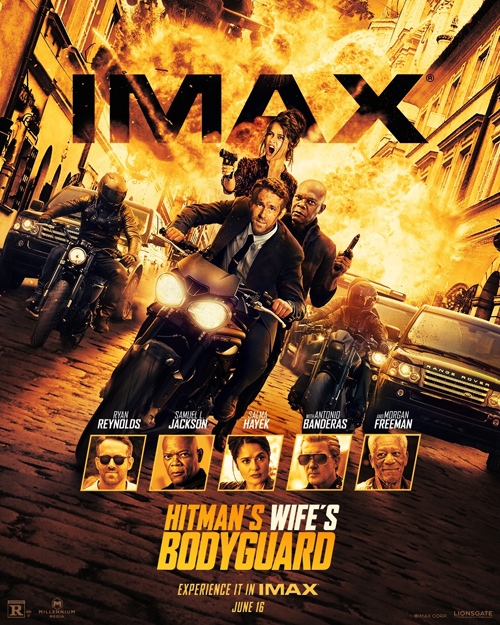 The Hitman’s Wife’s Bodyguard
(2021)
(SPOILERS) I’m unsure quite why this sequel was roundly slated by critics (and, it seems, none-too-loved by audiences). Sure, it has Ryan Reynolds in it, ubiquitous Ryan Reynolds, doing what he does best. Or worst, depending on your mileage. And Samuel L Jackson is there too, the Michael Caine of his generation, never one to pass on a project pay cheque. Neither necessarily merits an immediate thumbs down, though. Perhaps it’s simply the way the picture revels shamelessly in its lowbrow, quickfire, ruddy, cruddy delirium, daring you to find it distasteful. Director Patrick Hughes is no one’s idea of a restrained artiste, and The Hitman’s Wife’s Bodyguard is nothing if it is not a cacophony of noise, mugging and cartoonish ultra-violence. But it’s also frequently very funny.

It helps considerably that both Reynolds and Jackson are playing to their strengths and seem genuinely enthused. Added to which, Salma Hayek makes for an entirely complementary addition to the ranks. The chemistry between Reynolds and Hayek yields some of Hitman 2’s best interplay, as his bodyguard Michael Bryce – his licence currently revoked – is called in by Sonia Kincaid (Hayek) to rescue hubby Darius (Jackson), at the latter’s express request (it turns out he said anyone but Bryce should help him).

The plot is none-too important, albeit it finds Greek shipping tycoon Aristotle Papadopoulos (Antonio Banderas) planning to “destroy Europe to save Greece” based on the European Union posing additional economic sanctions on the country. Which, as villainous plots go, seems entirely reasonable.

Reynolds is playing the butt of others’ jokes – and fists, and bullets, and bonnets (he’s pirouetted several times) – throughout, which in no way lessens his motormouth. Bryce is also, for the most part, on a sabbatical (“No, I’m not doing guns right now”), so he resorts to the likes of pepper spray as a weapon. He’s visited by several amusing fake-out dream sequences (the opening, and one to the strains of The Best while under the influence of lithium administered by Sonia). And finally, Sonia adopts him.

This after variously denouncing her would-be-parenting (“I wouldn’t leave a Chucky doll in her care”), her terrible English accent and an explosion that leaves his head propped up on her posterior. There’s an agreeably slapstick quality to Brandon and Phillip Murphy’s screenplay, from the indignities Bryce suffers (“It’s okay. My head, knees and skin broke the fall!”) to the meta plot interventions (“Tuscany awaits!”) Plus, Overboard makes a significant story point (the original, of course).

And as with a Shane Black escapade, the picture is populated with colourful characters in every corner. REG returns in a very brief cameo. Frank Grillo’s Interpol agent has a nice line in absurd Scots-baiting (“All right, William Wallace, warm up the chopper”; “Sean Connery here’s going to give you a bunch of money to make the buy”). Banderas’ accent is ripe for riffs (“Did he say cha-cha chamber?”) Henchmen hitmen get good gags (“Even your heat signature looks old” Kristofer Kamiyasu’s Zento mocks Darius). Cannon fodder are the material of punchlines (“Gary, Johan. Are you ready to get your fuck on?”) And The Sign forms one, to Bryce beating up Black Sails’ Tom Hopper (“You’re lucky I love this song”).

There’s also Morgan Freeman, of course, leading the way with his dentures, as Bryce’s scornful stepdad; that’s a misstep, as Freeman is a prime offender in the autopilot stakes (maybe that also accounts for his jab endorsement; reading from the script as always. Less easy to explain away his alleged relationship with his deceased step-granddaughter).

The Hitman's Wife's Bodyguard grossed significantly less than half the original’s tally (which, I didn’t realise, was all the way back in 2017); maybe it will break even under various sales/streaming models, but it doesn’t make the mooted third instalment seem immediately likely. That’s okay. These movies are equivalent to bursting a water balloon over someone’s head. Immediately amusing but leaving little lasting residue.