You got the wrong pig by the ear. 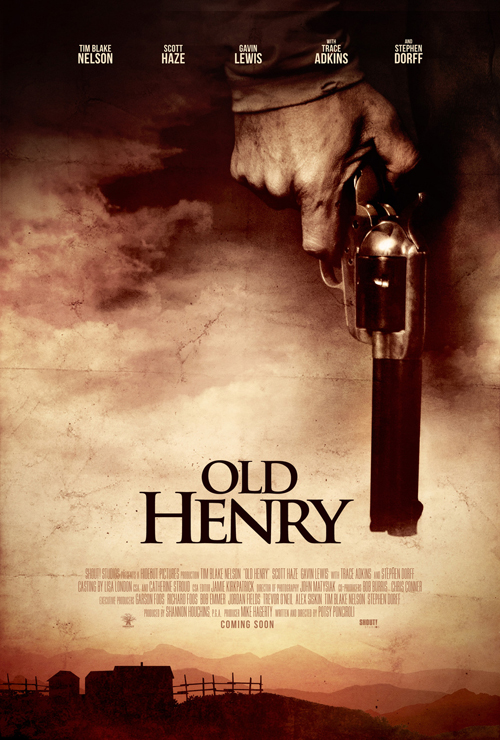 Old Henry
(2021)
(SPOILERS) Not one that appeared on many awards shortlists, but despite the fact that Obama’s PR vouched for it when drawing up “his” tally of the best 2021 movies, writer-director Potsy Ponciroli’s western is every bit as worthwhile as the very different Coen Brothers genre entry also starring Tim Blake Nelson of a few years back. Nelson was concerned people would automatically compare the two, but being fish and fowl, and his performances being likewise, I don’t think he need have worried. Really, his concern should be that no one even seems to have seen Old Henry.

This is very familiar terrain for the western, taking in devices and tropes from the likes of High Noon and Unforgiven (feeding pigs to pigs, and humans to pigs, meanwhile is surely a tip of the hat to Deadwood). It even sidesteps into comic-book territory, with the unassuming farmer turning out to be (near enough) a superhero. None of that familiarity is a bad thing in this case, though, since the pleasure comes through Old Henry’s nuances and variations on the form. Ponciroli has nothing on his resumé to suggest something so assured was on the cards, with a picture impressive for its deliberate pacing, the growing tension and escalating odds.

Henry (Nelson) rescues an unconscious, gunshot man (Scott Haze’s Curry) with a bag of money, against his better initial judgement (“Nope” says it all; having thoroughly surveyed the scene he rides away, only to reconsider). Taking him to his make-do hill farm, Henry must contend with the impulsiveness of his rebellious son Wyatt (Gavin Lewis), and then with Curry’s pursuers paying a call (including a fine, intimidating turn from Stephen Dorff as their leader Ketchum). They’re posing as marshals, while Curry actually is one, although it turns out nothing is quite so simple.

The father-son dynamic is well worn, but serves its purpose, driving up the tension when Wyatt makes poor choices. Poncirolli use the wilderness landscape keenly; it’s alternatively empty and intimidating. When violence breaks out, he martials the action with calculated precision (we’ve seen what he can do in that regard during a tense earlier scene where Henry eavesdrops on the not-marshals in a field of tall grass). One might gripe at some of his plot choices (if Henry is so intuitive, his decisions in terms of concealing his true identity – or lack thereof – and the trail of his past – he has old newspaper articles hidden away – seem positively slack at times). The balance is in the need to sustain tension, however, which Poncirolli does admirably.

Mostly, this is about an unlikely gunslinger, a lethal, coiled spring unleashed, as unassuming Henry is roused to reluctant action (his attempts to send Curry on his way impeded by the arrivals). “He didn’t hold that pistol like any farmer I’ve ever seen” observes Ketchum of their first encounter, sending the message that Henry is a man of dark secrets. That his principle secret should eventually be unveiled – he is Billy the Kid – could easily have been rather daft, but the casting of Nelson, far from your photogenic Emilio Estevez type, is in the ballpark of the actual William H Bonney’s features (or whom we’re told is the actual Bonney/Henry McCarty). There’s a lean, laconic, grizzled directness to Henry, matter-of-fact about any given situation and his chances in dealing with it. The scene where he leaves the house to confront the posse of riders, who hold his brother-in-law (Trace Adkins) hostage, and the latter warns them “You have no idea the hell storm you’re fixing to let loose” is a “He’s Batman”-esque harbinger of what is to come. And because such premonitions of violence relate to Nelson, not Clint, they carry extra punch.

Reviews were generally positive for Old Henry, but it’s unfussy efficiency and – perhaps more so – twist may be its undoing in terms of achieving a wider audience and higher plateau of respect. Frankly, it doesn’t need the Billy the Kid revelation to work, and there are probably those who regard it as a cheap gimmick. I’d say it gets away with it because Ponciroli pulls off the production with an admirable degree of verisimilitude. Each department deserves commendation, from John Matysiak’s overcast, desolate photography to Jamie Kirkpatrick’s sharp editing and Jordan Lehning’s evocative score. All of which depend on Nelson – who also worked on the screenplay with Ponciroli – to breathe life into the main character. One of last year’s (all too few) highlights.