You’re going on a journey. A journey through memory. 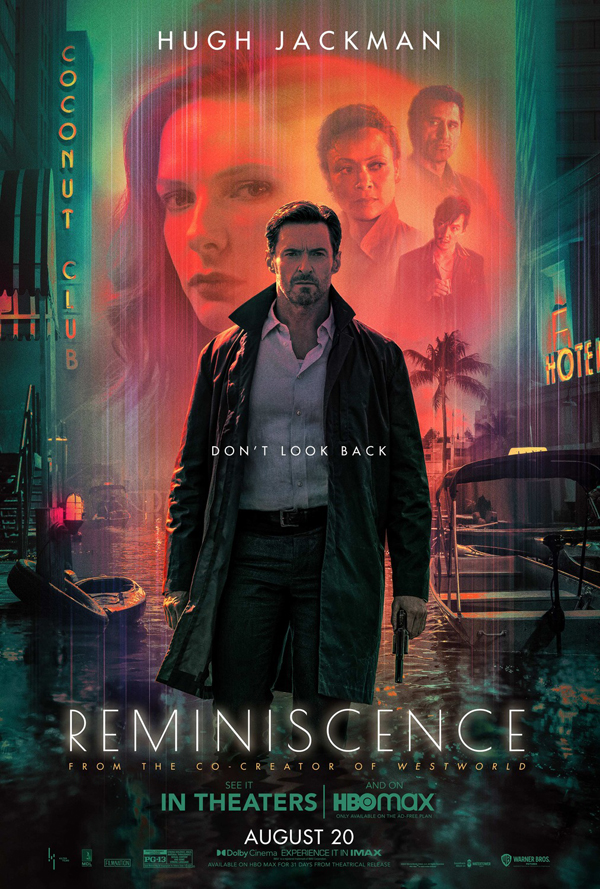 Reminiscence
(2021)
(SPOILERS) Jonathan Nolan rewards his missus Lisa Joy for all her hard work on the variable-at-best Westworld by co-producing this consummately bland sci-fi. Reminiscence is one she, as a true multi-hyphenate would-be-auteur, has written, directed and co-produced. I’m rather reminded of a previous Nolan alumni spin-off sci-fi bomb, Transcendence, which Wally Pfister unwisely made his directorial debut. Since then, crickets.

Does a similar fate await Joy? Well, she and hubby have various TV projects lined up, so I don’t think there’s any comparable concern looming, but I also doubt Warner Bros is going to be lavishing up to $70m (unbelievable, as it looks DTV cheap) on her again any time soon. It probably wasn’t wise to helm just one episode of Westworld (2.4: The Riddle of the Sphinx, which I recall being pretty good, if inevitably patchy) before attempting something on a vaster scale.

Reminiscence plays like a waterlogged, dystopian Blade Runner wannabe, all the way down to Hugh Jackman’s tired future-noir narration, but in contrast to Sir Ridders, Joy has zero idea how to fill her space. On that level, her world is more comparable to the spartan visions of Denis Villeneuve. Whatever his flaws, though, Villeneuve brings a rigorous precision to his compositions. Reminiscence just sits there, flat and lifeless, a wash of dingy cinematography and second-rate CGI.

Joy isn’t only looking Scott’s classic – now set three years ago, when the world was a simpler place. She is also attempting a Chinatown-style corruption narrative, one that singularly fails to elicit intrigue. Water is key to both stories, but in this one, there’s much too much of the stuff (Reminiscence features land barons, sitting pretty on the drylands, thanks to dams, while everyone else must make do with a Miami that now resembles a less enviable Venice). Yes, the movie is rife with the kind of predictive programming the Nolan clan make their bread and butter, a veritable Gretageddon of higher sea levels and temperatures (there’s also a drug called Baca, but no obvious clue as to its special properties, and a recent war, of which most of the cast are veterans).

Additionally, the future tech hook is a type of VR, one that allows the user to relive their memories. We’ve seen a variant on this with the dream machines in Until the End of the World, although here, one needs to be immersed in a tank à la Altered States. Users can become addicted to the experience (“burners torn apart by the worlds they straddle”), and both Strange Days and Minority Report comes to mind. In the former, Ralph Fiennes relives his earlier videos with added sense-tech. In the latter, Tom Cruise gets high watching his abducted son; indeed, Reminiscence’s ending, in which Nick (Hugh Jackman) is allowed to serve his sentence for burning Boothe (Clifton Collins) – a particularly sadistic act – by reliving his experiences with Mae (Rebecca Ferguson), isn’t far from the actual ending of Minority Report – you know, the one most people mistake for an absurdly happy one.

It occurred to me that the most fluent possibility for a plot based on this concept is one Joy mentions in passing but fails to capitalise on; the idea that one’s memory can be accessed and used as evidence. All an antagonist needs is the tech to bypass that, and presto, you have a labyrinthine murder mystery.

Unfortunately, what we have is a rather dull protagonist in Nick, proprietor of one of these memory businesses. He begins a relationship with Mae, who it turns out has been hired to hoodwink and steal from him. With no sparkle to their relationship, however, there’s no weight when he is betrayed and begins to seek answers. Developments are resolutely unaffecting; since Reminiscence is reliant on the lure of mysteries mined, its lead burdened with melancholy and regret, that’s a major problem. Nick’s given a gumshoe narration, so perhaps he should have been one (“To find Booth and Mae, I had to go to hell itself”; “The trickle became a flood. Maybe this time it would wash the world clean”).

That aspect isn’t everything, of course. There’s little in the way of chemistry between Harrison Ford and Sean Young in Blade Runner. But what there is, is a tangible, immersive environment. The same with Chinatown. However much potential Joy’s 2013 Blacklist screenplay might have on the page, she’s unable to transform it into a palpable or memorable world. As with Westworld, the future seems to be one where we inevitably yearn for less attachment and greater escape, the perma-lustre of nostalgia via technological augmentation. Only Watts (Thandiwe Newton) resists this, choosing to reconnect with her daughter rather than pickle herself with drink, but it’s a rather ineffectual sop to the challenges of this miserabilist future.

Jackman, Ferguson and Newton can do little to push back Joy’s determinedly humourless, dour tone; I’m presuming the same misapprehension that lured Depp to Transcendence convinced them this might be a winner. Mostly, I can’t get over the price tag; apparently, Reminiscence would have needed to make at least $110m to break even. With a global gross of $15.5m, I can’t see HBO Max making up the difference.