Everything was dismal as murder. 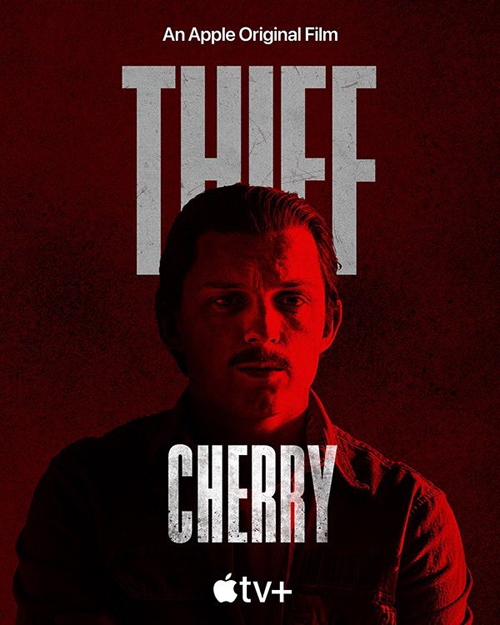 Cherry
(2021)
(SPOILERS) There’s something almost pathetically juvenile about Anthony and Joe Russo choosing to make Cherry, as if their reward for delivering all those massively successful MCU monsters was a “grownup” movie. Variety’s Owen Gleiberman ranked it the worst film of 2021, labelling it a “spectacularly overblown debacle” and “less a movie than an overdirected 140-minute showreel of gritty brand extension”. He isn’t wrong. Anyone who hadn’t realised on first sniff of their Marvel efforts will now have to admit the Russos’ “auteurishness” is pure affectation, soulless study devoid of actual inspiration or creative spark.

Cherry’s a tiresome, spiked mishmash of Jarhead and Requiem for a Dream, but those movies at least display some degree of prevailing acumen. Indeed, Jarhead director Sam Mendes’ general oeuvre is a fair point of comparison: a journeyman in subject matter – there’s very rarely a sense he’s actually telling a story that engages him: Revolutionary Road and American Beauty, perhaps – who applies himself in as stylistically extravagant a manner as possible. Nevertheless, he seems like someone with genuine vision set next to the Russos. Give Michael Bay material about addiction and blue-collar crime or Middle Eastern combat, and he can’t help himself, whatever you may think of the results (Pain & Gain, 13 Hours: The Secret Soldiers of Benghazi respectively). The Russos simply roll out a rote roster of technical tics, over-literal soundtrack grooves, trite narration, punchy on-screen captioning, distracting aspect-ratio quirks, laboured chapter transitions, and incontinent subjective camera and cinematography (for the purposes of altered states), amid what they doubtless believe is almost Beavis and Butthead-clever commentary (the banks robbed include “SHITTY BANK” and “BANK FUCKS AMERICA”). Alex Cox they are not.

They presumably believed they had to dress up Nico Walker’s semi-autobiographical, 2018 misery-porn novel Cherry somehow (I say misery porn; unlike Requiem for a Dream, this has a happy ending). Cherry (Tom Holland) joins the army after Emily (Ciaro Bravo) breaks his heart; she comes back to him but too late, as he’s signed up and is off to (Full Metal Jacket-lite) basic training, amid insightful remarks – as in really obvious ones – about the condition that is the war machine: “I started to get this feeling like it was all just make believe”. This follows suit in the Gulf as a medic (horrors of war, PTSD, swathes of lens flare, all-lite, and redundant observations like “Most days, it felt like we were glorified scarecrows”). Cherry survives, returns to Emily, is haunted by his experience – aside from the war carnage, learning his basic training included “about a hundred fucking shots” can’t have done his health much good – and soon enough, they’ve both become junkies. Their addiction – Xanax, OxyContin, heroin – seems to go on interminably and soon graduates to bank robbery.

While derivative, Cherry is just about able to support itself during the Gulf sequences. Once it’s back in junkie heaven, however, it’s a lost cause. You better be sure you’ve got a strong through line, as both War on Terror and substance-abuse subjects are notorious negatives when it comes to successful storytelling (they’re also popular among oblivious Hollywood types, as they’re assumed to be a shorthand for making important statements, by their very nature; trauma, suffering, state of a nation etc). The Russos have absolutely nothing to say here, other than offering the most facile prods in the direction of “things are bad”. It’s your classic sound and fury – or editing – signifying nothing.

Holland meanwhile, the middle-class-lad-made-street, looking like former Spidey Tobey Maguire in specs and entirely unpersuasive as a military man, gets to do lots of ACTING but to little avail. He winds up with a ridiculous moustache, as if he’s auditioning for a remake of Beastie Boys’ Sabotage video. There’s a decent performance from Jack Reynor in there, as a drug dealer, and Henry Jackman’s score seems to belong to a much more artistic, worthwhile piece of cinema, but otherwise, Cherry is rightly consigned away on AppleTV+, where no one can see it.