I just popped some heroin and took a gas pipe. 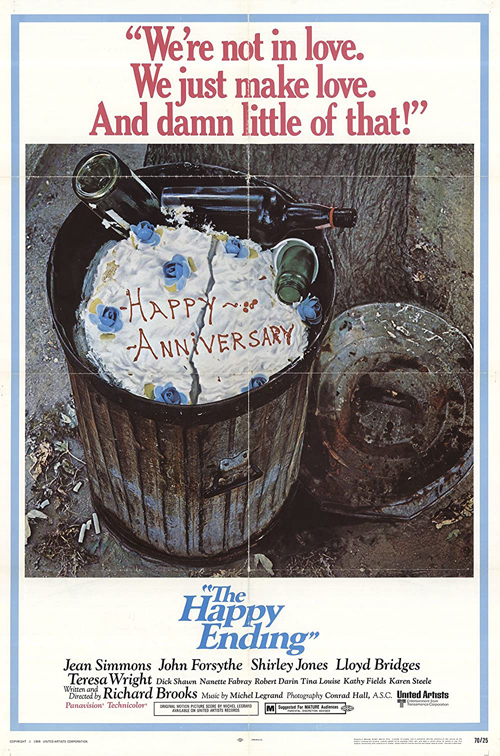 The Happy Ending
(1969)
(SPOILERS) Turgid melodrama that earned Jean Simmons a Best Actress Oscar nomination: there’s no contesting the quality of her performance, only the material she has available. Director Richard Brooks had earlier worked with his missus, far more successfully, in Elmer Gantry, and he only has himself to blame, since he also wrote and produced The Happy Ending.

Also uncontested is the quality of the cinematography from Conrad Hall, who would win an Oscar the same year for Butch Cassidy and the Sundance Kid; whatever issues the story has, it’s gorgeously shot. Simmons looks accordingly untouchable throughout, perhaps not the best approach – except to contrast how she sees herself with the reality – for an old soak housewife in an unfulfilling marriage. Indeed, this essential divide tends to undermine many of the movie’s positions, however persuasive Simmons is (and she is); Mary Wilson barely has a hair out of place, even when she’s OD-ing. When she meets old college friend Flo (Shirley Jones), Mary tells her she still looks 28, but if Simmons looks 35 that’s hardly much of an issue (Jones was 35 when the film was released, Simmons 40). If Flo were honest, she should have said Mary was fussing about nothing, but she takes the compliment and runs (telling Mary it’s because she isn’t married).

Contrastingly, Forsythe had turned 51, and while he’d increasingly nurse the silver fox sable that would culminate in Blake Carrington, he’d also move in an irreversibly plankish direction; by this point, we’re a long way from his Bogart-esque turn in The Trouble with Harry (ironically, one of Mary’s reveries is over Casablanca; she’s like a lush version of Mia Farrow in The Purple Rose of Cairo, given to fantasising away her life in the movies and incurring hubby’s indignation for refusing to accept never the twain shall meet).

Pauline Kael called The Happy Ending “fatally misconceived”, opining it was “meant to be a message movie for women’s liberation, but this kind of movie never liberated anyone”. It’s difficult to see anything quite so demonstrative about its aims, really, though. It’s hardly Shirley Valentine. One would expect a position of empowerment to be reached, but Brooks’ infuriating flashback structure impedes the narrative from progressing in anything other than a fitful manner; a good third of The Happy Ending is spent in-flight to Nassau, as the course of Mary’s descent into domestic oblivion is charted.

It is, inevitably, a path of empty social norms replaced by further empty social norms (most of which revolve around material or emotional possessions/crutches). What Brooks seems to be suggesting, if taken literally, is that the reward for rejecting a sterile marriage is a pokey flat and a job in a department store. The entire gloomy terrain, as depicted, is of bored drunk housewives seeking validation via various forms of lifts (facial or otherwise), in order to attract inattentive spouses who are likely having affairs. And if the preceding isn’t the case, they (the women) are serial adulterers. Making a career of being the bit on the side. You rather wish Brooks had made a stupefied, aging-hipster flick, with Mary dropping acid in the Bahamas before bumping into Bobby Darin as an Italian gigolo.

Harry: One thing you’ve got and that’s class.
Mary: You should know. You’ve pinched every acre of it.

Oh wait, that last bit happened. The Bobby Darin bit. Although, he’s only putting on the accent. Also showing up is Lloyd Bridges, looking like he picked a bad week to remain uncommitted. And Dick Shawn as Fred’s associate Harry, a very different part to the one he played in It’s a Mad, Mad, Mad, Mad World (“I'm coming, momma!”) Nanette Fabray is the maid offering booze and advice (“Honey, all us girls over 35 got the same trouble”), while Teresa Wright is mum (despite being only eleven years older than Simmons). Mary’s belief that her mother and father had an idyllic marriage (“a game we played for your benefit”) appears to be grist to her living in a romantic bubble, one rudely burst but then buoyed up by booze.

One might argue The Happy Ending is a more reflective movie of its era than all those love-gen flicks that had nothing to do with how the majority lived, but Brooks – Simmons’ hubby until 1980 – was pushing sixty when he made it, and may not have been the ideal chronicler of the prevailing mood (Simmons, meanwhile, likely went along with him as the dutiful wife, hopefully minus the booze). If asked to place The Happy Ending, sight unseen, you’d be forgiven for assuming it was made near the other end of the decade.