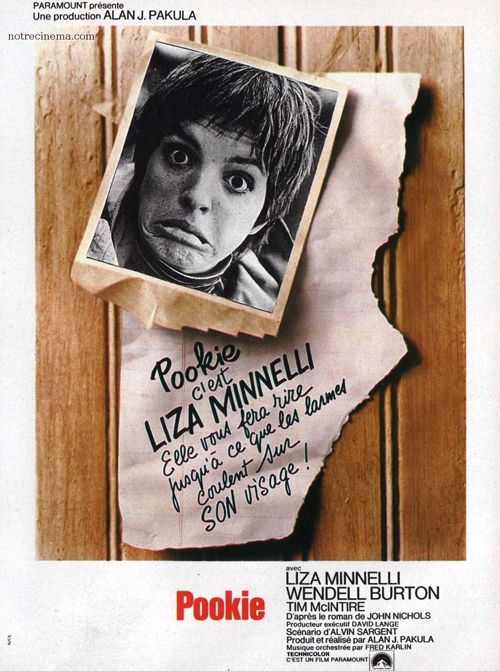 The Sterile Cuckoo
(1969)
(SPOILERS) Alan J Pakula’s debut has more in common with his ’80s relationship dramas than his more immediately adjacent ’70s forays into neo-noir. Even then, though, it stands somewhat apart. An adaptation of John Nichols’ 1965 novel of the same name, The Sterile Cuckoo actually bears closer resemblance – to jump to another decade – to ’90s indie pictures; it’s a low-key, lo-fi affair revolving around likeable or not-so-likeable eccentrics (we’ve seen not dissimilar from Wes Anderson, Alexander Payne and Hal Hartley).

Pakula isn’t one for extravagant styling, though, so The Sterile Cuckoo makes its mark via character and theme, revolving around the relationship between two college students, loopy Pookie Adams (Liza Minnelli) and Jerry Payne (Wendell Burton). Pookie strongarms her way into affable, acquiescent, unexceptional Jerry’s life when they meet at a bus stop; on the journey, she proceeds to requisition a seat next to him by claiming they are brother and sister and “our mother just died”. Essentially, she’s an outrageous, compulsive liar – at one point, she informs Jerry she is pregnant, yet after Christmas break, he is told it miraculously “went away” – but we’re intended to find her sympathetic and vaguely endearing. And as Minnelli plays her, we very nearly do. However, when she tells Jerry “Sometimes, I have to get away from the noise, you know?” my response was the affirmative. 27 minutes in, and you haven’t stopped prattling.

Whatever baggage Minnelli subsequently accumulated (and just being Judy Garland’s daughter was sufficient to be getting on with), her performance is remarkably natural and assured; there’s no affectation or veneer here. It’s been said Garland didn’t think her daughter should take the role, as she identified too strongly with the character (something Pakula more or less confirmed). That may be so; there’s no doubting her Oscar nomination was well deserved, and it’s interesting that her subsequent screen career (give or take a Cabaret and Arthur) was so limited.

Nevertheless, there’s no getting away from Pookie being a nut, cuckoo in the coconut. Or to put it slightly kindlier, as Jerry says when he first meets her, “You’re a very unusual person”. She’s such a large personality, she needs someone she can project on, and Jerry’s blank slate is perfect. How much of her history is invention is never entirely clear, but as a delusionary dragging a poor, unsuspecting, well-meaning soul into her orbit, it wouldn’t be a great stretch for this whimsical tale to have taken a decidedly different, Play Misty for Me turn (the original screenplay apparently played up her stalkerish qualities).

We see that particularly with her pleas to come and stay with Jerry over Easter break (resistant, he eventually concedes to her request). She’s entirely adverse to any scenario where she’s no longer the centre of attention and reduced to part of the crowd, namely the student normies; in an inversion, anyone who fails to meet her rarefied standards, which is pretty much everyone but Jerry until he leaves her, is a “weirdo”.

Essentially, Pookie lacks basic empathy skills. Others have to meet her on her level, and she cannot even conceive of going halfway. She thinks nothing of manipulating and causing others emotional distress, and has exhibited this from an early age (telling the mailman she had leukaemia). That said, the ambiguous status of Jerry’s dormmate Charlie (Tim McIntire) finds her capable piercing insights; she believes he’s a closet case and suggests he has designs on Jerry. At very least, she is correct to recognise the chink in his macho bravado (“I bet you and me are the only two guys in the whole dorm who have never made out” he tells Jerry on a car trip).

It’s been suggested, as far as semi-autobiographical characters go, that Nichols portrayed himself/Jerry with much more respect than he deserved, as the writer was wont prey on vulnerable types such as Pookie; Jerry is essentially passive, like Ron Howard played by Jesse Plemmons, but it’s inevitable that he will eventually find Pookie’s fractured, possessive behaviour too much of a stress and strain. The ending, however, rather than a conflagration, simply finds Pookie dissipating; following their separation, she drops out of college. Jerry eventually finds her and puts her on a bus home, bringing her back round to a sympathy vote, an ache for one completely lost and unreachable because they’re so bound up in their own world.

Pakula allows the proceedings to amble, unfolding in a stately, episodic fashion; he’s highly reliant on montages and the recurrent use of The Sandpipers’ (Oscar-nominated) Come Saturday Morning. It’s a bit of an earworm, as it would surely have passed unnoticed, were it not for its employment as motif. Alvin Sargent (Gambit, Paper Moon, Ordinary People, Spider-Man 2) furnished the screenplay, his third produced, and Pakula imbues the proceedings with an unforced, naturalistic vibe. In that sense, The Sterile Cuckoo might be regarded as very much of its period, but the cultural awareness of its characters seems half-a-decade-or-more prior, closer to American Graffiti than The Graduate. 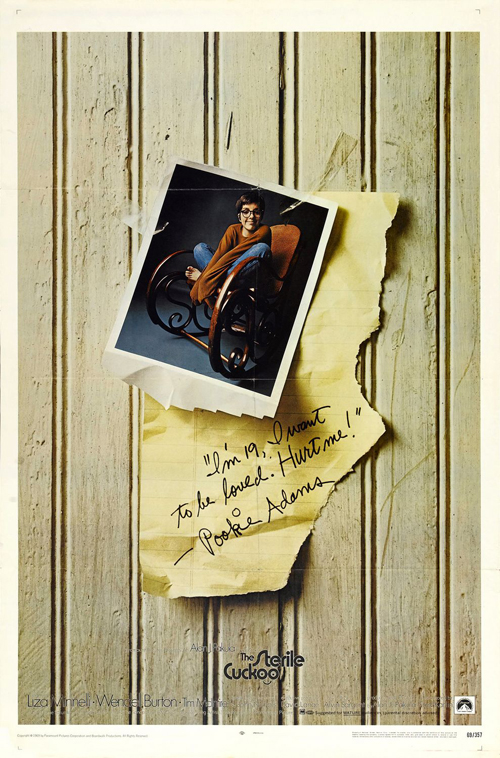