We are, of course, Norwegians. 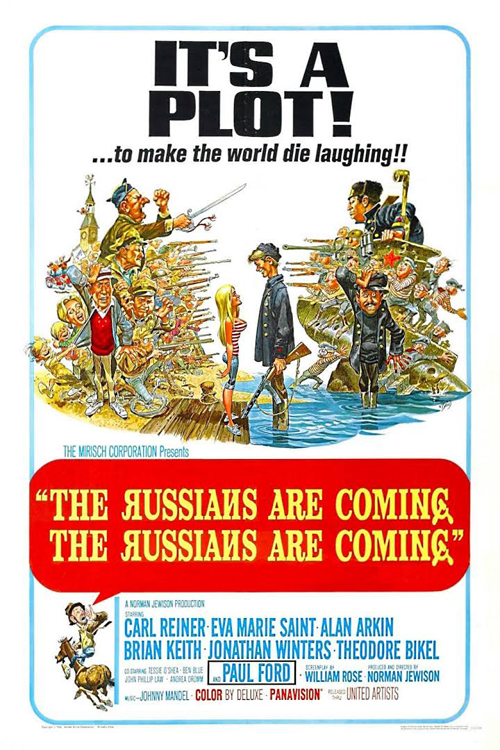 Pete: Don’t tell them anything! He hasn’t even tortured you yet!

A Russian submarine runs aground on a sandbar off Gloucester Island on the New England coast, and a landing party led by Lieutenant Rozanov (Alan Arkin) is sent to locate a motor boat to free their vessel. The initial detention of musical theatre writer Walt Whittaker (Carl Reiner) and his family fails to deliver the goods, so they venture into town, inevitably leading to word of their titular “invasion” getting out and the natives becoming restless, if not to say trigger happy. There might have been considerable juice for fish-out-of-water and cultural difference comedy here; instead we have to settle for successive bursts of hamstrung hysteria. Such strains can only sustain themselves so far, meaning the material is sorely stretched over a two-hour running time. The result is a little like a benign version of Went the Day Well? or The Eagle Has Landed, but “funny” (“Suppose they start raping?”)

Pete: I bet I’m the only kid in the fourth grade whose father is a famous trader.

Indeed, the entire enterprise is so very, very thin. Reiner is encouraged to work his way through a range of tired sitcom dad schtick; weak as that is, his is the only character you could call fleshed out. Bits work: laboriously riding a bicycle into town like an Americanised Monsieur Hulot; his poisonously pugnacious offspring Pete (Sheldon Collins, also Bing Quantrell in The President’s Analyst) engineers much talk of dad being a traitor and “just like Arnold Benedict” for collaborating with the enemy. Which is amusing, as far as it goes (“If you wanna hit him, it’s alright with me” he tells wife Eva Marie Saint, such is the fate of former – by Hollywood standards – glamorous starlets: reduced to playing Carl Reiner’s wife).

Pete is, essentially, the average islander in miniature. After all, “All they’re trying to do is borrow a motorboat”, yet the entire world’s against the Soviets (one might variously substitute taking out biolabs and elite strongholds; either way, Russia remains the evergreen enemy du jour, always obligingly on hand to fire up international discord, particularly to distract from plandemics going off the boil and global financing up the swannee, in order to pave the way for – again global – digital currency).

Model Andrea Dromm embarks on a romance with John Philip Law’s sensitive submariner. Jonathan Winters has a few choice moments as the police chief’s assistant; the chief is played by Brian Keith, wearily au fait with the islanders’ aptitude for leaping to conclusions. When the sub shows up and there’s a confrontation at the harbour, with Theodore Bikel’s captain presenting an ultimatum, director Norman Jewison briefly shifts into gear and The Russians are Coming, the Russians are Coming hints at how good it might have been. Arkin suddenly gets to be funny and offhand; elsewhere, he’s allowed very little to work with. But wouldn’t you know it? Once preconceptions and embroidered animosities are put aside – thanks to a distressed child bringing out universal protectiveness that knows no national boundaries – everyone gets along jolly well.

Rozanov: This is your island, I make your responsibility you help us get boat quickly, otherwise there is World War III and everybody is blaming you!

A certain sensibility is needed to pull off something as knockabout as this. John Landis had it. When you don’t… Well, Spielberg’s 1941 is in the same lineage. Of whom, his recent redundant West Side Story remake repeated the conceit of employing no subtitles for the foreign-language scenes; Alan Arkin and Theodore Bikel are/were fluent Russian speakers (Brian Keith too, although he didn’t need it). Jewison wouldn’t tackle anything so goofy again – the picture’s success gave him the clout to make In the Heat of the Night the way he wanted, and the rest is history – but if his film never takes off quite the way it should, its success in both box office and awards spheres testifies to its zeitgeist quality.

Rozanov: I am wounded in dignity only.