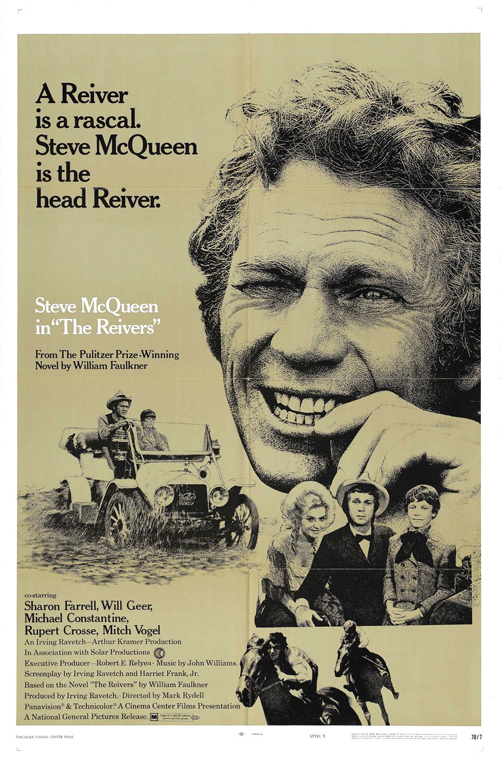 The Reivers
(1969)
(SPOILERS) I’m sure there’s an appetite for this brand of nostalgic, good ol’ southern boys tale – one only has to look at the later successes of The Dukes of Hazzard and numerous Burt Reynolds vehicles, generally foregrounding vehicles – but it’s rather lost on me. The Reivers comes from sometime Hollywood resident pisshead William Faulkner’s 1963 The Reivers: A Reminiscence, and was doubtless considered a hot property: a Pulitzer winner that attracted Steve McQueen to star. Unfortunately, it lands largely as reheated Mark Twain, far too pleased with its comfort-zone childhood glow and the faux wisdom of times past.

Set in 1905 – “It seems to me now that the days were like an endless summer” narrates Burgess Meredith, the adult self of Lucius (Mitch Vogel), which tells you everything you need to know about how it’s going to go – The Reivers charts Mississippi residents Boon (McQueen), Ned (Rupert Crosse) and Lucius’ excursion to Memphis. Boon is the manservant of Lucius’ family’s household, and he treats the new family car, which they use for their jaunt, as a treasure; Ned is a relative of the family; at one point, he recites to Lucius’ father (Lonny Chapman) how they have the same great granddaddy, who in Ned’s case slept with a slave girl. He’s an amiable rascal who causes no end of problems by exchanging the car, a yellow Winton Flyer, for a horse. Hijinks! Much of their adventure revolves around the brothel Boon is visiting; he has a relationship with Corrie (Sharon Farrell), with whom young Lucius is instantly smitten.

The movie, directed by Mark Rydell – later a go-to for inert Bette Midler vehicles, not generally foregrounding vehicles – and adapted by Harriet Frank Jr and Irving Ravetch (Hud, Norma Rae), tackles its more serious subject matter, that of racism and prostitution, with a larky tone that diffuses the sporadic outbreaks of tension. Lucius gets into a fight with brat Otis (Liny Davis) over Corrie’s honour (“Eleven years old and already cut up in a whorehouse brawl”). Butch (Clifton James later of Sheriff Culpepper, who was just implicitly racist) sets to on Ned after the latter talks back to him (“I said, there’s somewhere that the law stops and just people begin”).

A boisterous fight breaks out, accompanied by John Williams Overkill on the soundtrack (his score is abysmal, alternately saccharine or offering a rambunctious good time – indeed, you’d be mistaken for wondering how it was his earlier work ever translated into someone who’d give us Star Wars, Superman and Raiders of the Lost Ark. Perhaps he brought a full orchestra with him to a meeting with the devil at a crossroads). Later, Boon gives Corrie a black eye for prostituting herself to Butch, which she did in return for the party’s release from jail. Come the end, they are happily wed. Well, apart from his occasionally hitting her, presumably.

McQueen’s solid enough in charismatic but non-too-bright mode; this is not exactly his most star-powered choice of role, but doubtless he did it for the kudos. Crosse – who died a few years later – is very funny as his irrepressible foil, equipped with a secret formula for ensuring their horse wins. Will Geer services the benign old patriarch figure with aplomb, as Lucius’ grandfather “Boss”; Geer would offer the last word in such roles as Grandpa in The Waltons, again a few years later. As far as it goes, The Reivers is well made and well observed, but tonally it’s often like nails on a blackboard.

The narration is full of low-strung nuggets – “We didn’t fear death in those days, because we believed that our outside was just what you lived in and slept in, and had no connection to what you were” – and Lucius learns a very good lesson. Just as you’d expect from a weekly dose of The Waltons, on that score. The title, “In plain English, I’m afraid it meant thieves”; like Pauline Kael, I assumed it had something to do with threshing.

Kael was mixed-positive on the movie, but she delivered an all-out rave for Crosse embodying Ned as “a living, walking sense of humour”; the actor was Oscar nominated but had some serious competition in the Best Supporting Actor category that year. Kael also correctly identified The Reivers’ “rogue Disney” tone, and how the score was “like a fungus that cheeps and chirrups… constantly reminding us to appreciate how darling everything is”. You guessed right; Williams was also Oscar nominated. 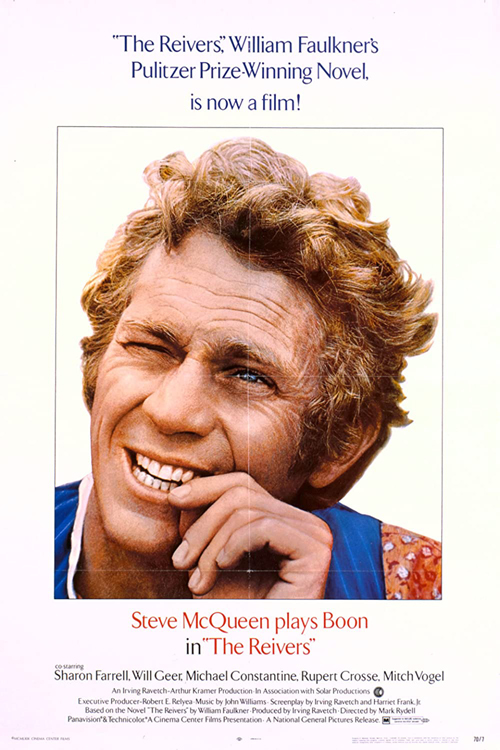