Not so tough when you’re fighting someone 700 times your size, are you? 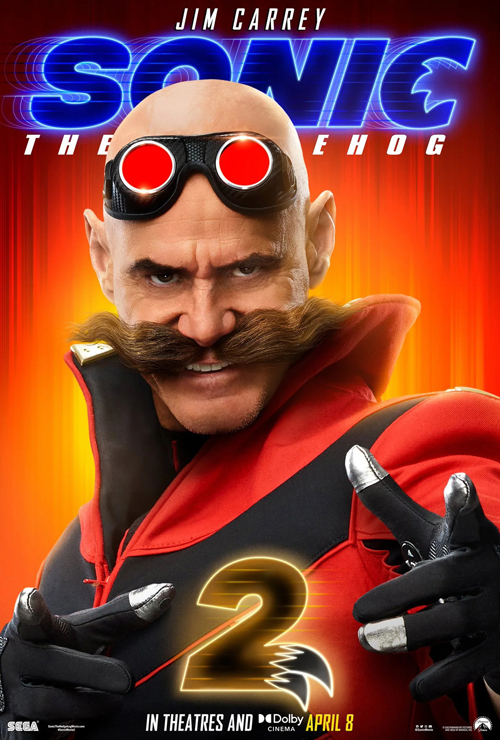 Sonic the Hedgehog 2
(2022)
(SPOILERS) I don’t find Sonic the Hedgehog, as realised by Jeff Fowler’s FX team and voiced by Ben Schwartz, particularly endearing. That’s a reasonably hefty barrier to getting on board with, ahem, a run of movies featuring the character. I do, however, think Jim Carrey is pretty funny here, whichever version of Jim Carrey that is here (not, it seems, the former law-of-attraction loving, TM-promoting, anti-vax, Illuminati-baiting one, but more plausibly some post-wrongful death suit performing seal). Consequently, Sonic the Hedgehog 2 is patchy enough, even without factoring in all the material devoted to the humans who aren’t human cartoon Carrey, and the animated characters who aren’t the already less-than-endearing Sonic.

It’s much like the first, then, but with the added burden of several other game characters. Colleen O’Shaugnessey has previous form as Sonic’s fox pal Tails (rather like Bart Simpson, she voices a boy), while Idris Elba scores a rare semi-successful Hollywood role – in as much he “disappears” into it – as sometime antagonist Knuckles the Echidna. The key thing to remember is that, even though neither of them is a Sonic-styled hedgehog, they still look like Sonic-styled hedgehogs. Just not blue.

Dr Robotnik: I can smell the electricity in your brain.

The plot involves a quest for the canonical master emerald – I didn’t have a Sega, so I can’t vouch for this – and… I’m guessing you know how these things go. How do you sustain the plot for material based on for toys and games? Transformers repeatedly threw bowdlerising behemoths our way; at least Sonic 2 only nudges two hours. It finally lost me during the last thirty minutes, a protracted fight involving a giant Robotnik robot – conjured up because, having taken possession of the emerald that “turns thoughts into power”, he’s now unstoppable.

Perhaps there’s some subtext here, with Robotnik, essentially your transhumanist type (“I’m going to slave humanity and force them to service my machines”) martialling the territory of using thoughts as weapons. If so, it’s quite thin. As thin as Sonic’s moral lesson to Knuckles (“Because being a hero isn’t just about taking care of yourself. It’s about taking responsibility for other people”).

James Marsden, just glad someone will still employ him after all these years determinedly displaying zero personality, again teams with moonfaced Tika Sumpter; Sonic is now adopted, making for a truly interracial family unit (black, white and blue). There’s a peculiar plotline thrown in for good or bad measure, in which Tika’s pal Natasha Rothwell’s wedding to Shemar Moore turns out to have been a ruse on the latter’s part – as a member of GUN: Guardian Units of Nations – to secure “uncontrolled extra-terrestrial” Sonic; unfortunately, she forgives him.

Dr Robotnik: Sadly, you’re as useful to me now as a backstage pass to Limp Bizkit.

Sonic musters a string of pop-culture quips, referencing “Clifford the Big Red Rage Monster”, “Oh great. The Winter Soldier” and “Professor X meets Monopoly”, but it’s only Carrey’s that land. If it had been my call, the entire movie would have been devoted to Robotnik stranded on The Mushroom Planet (“My only companion is a rocked I named stone”; “The question is, for whom am I narrating this?”) Whenever Sonic 2 cuts back to Carrey, it’s a welcome relief. He’s inevitably doused beneath the effects-heavy finale, but he generally offers a decent line in delighted villainy, while Lee Majdoub is appropriately obsequious as his loyal latté-frothing underling (having attempted to make coffee from mushrooms while marooned, volubly unsuccessfully, Robotnik’s first taste of the real stuff in months elicits a “Could use some mushroom”).

Dr Robotnik: Oh great. Next thing you know, there’ll be reports about a hostile work environment.

Per Sonic lore, there’s reference to echidnas vs owls, who have been fighting each other for centuries “like Vin Diesel and the Rock” (there was a Rock reference in the first movie too). And the existence of Project Shadow (which, I understand, was developed by Robotnik’s grandfather, and so suggests the legacy of deep underground black ops, if you will). Then there’s the reliance on portals as a means to get around the universe. Which, the space lie being what it is, would be the most feasible means of getting from one realm to another, à la Stargate. If so, and very if, the softest of disclosure there.

Dr Robotnik: Thank you, sycophant. Your adulation is inevitable.

Naturally, Sonic 3 is in development. And… a Knuckles spin-off series with Elba attached? Idris certainly isn’t choosy these days. Anyone would think he was James Marsden.