We're coming for you, tiny man! 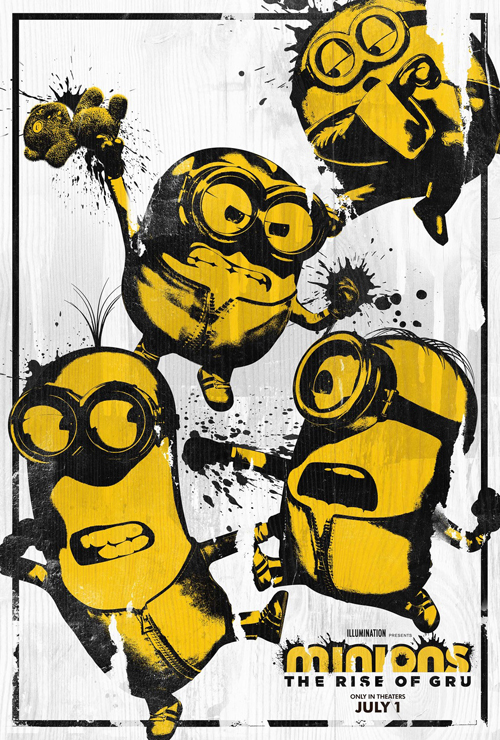 Minions: The Rise of Gru
(2022)
(SPOILERS) I’m far from immune to the appeal of the Minions, although I’m much less persuaded by the parent series that spawned them. This second prequel manages to throw in a more-than-healthy slice of Gru, and has him in the title, which rang a mild alarm bell. However, perhaps because this is a pre-reformed supervillain, albeit a pre-reformed supervillain who’s also pre-supervillain – so when it comes down to it, we never really see him all that villainous, ever – I found the overall brew much more appealing, conjuring something of an Austin Powers vibe with its ’70s setting via The Incredibles, with its teams of villains and their high-tech gadgetry. Plus, of course, little yellow creatures fond of exposing their arse cracks (well, either them or the Illumination staff).

Gru dreams of joining the Vicious 6, the preeminent supervillain team who have just disposed of their founder member Wild Knuckles (Alan Arkin, a mere slip of 88 and on great vocal form). Unsurprisingly, because he’s only eleven, they laugh Gru out of their supervillainous headquarters. The Vicious 6 comprise new leader Taraji P Henson’s Belle Bottom, JCVDs Jean-Clawed, Dolph’s Svengeance, Lucy Lawless’ Nun-chuck and Danny Trejo’s Stronghold. Their various gadgets and vehicles had me wondering why no one has made a big screen Wacky Races… But apparently it was rebooted in 2017 and the villains in Scoob were… Oh God, it’s so depressing.

Gru has the last laugh, though, re non-selection, snatching a recently snatched super stone from them, a stone Minion Otto then manages to lose/trade for a pet rock. It entirely escaped me that the stone was connected to the Chinese zodiac, and so enables the supervillains’ transformation into animals therefrom when they get it back. Why? I have no idea.

Illumination are hardly what you call woke, but it’s possible they put quota, token gesture indulgence of such things, just to avoid anyone pointing the finger their way. Hence, the new supervillain leader is a woman/blaxploitation homage. And hence, aside from chasing the profoundly busted Chinese marketplace, Michelle Yeoh – not at all stereotyping, this – is a Kung Fu acupuncturist who teaches Minions Kevin, Stuart and Bob martial arts. Regardless, the third act of Rise is a marked shift down into a gear of schematic showdown and fighting. While it doesn’t exactly undo possibly the best franchise entry to that point, it does diminish the overall inventiveness.

Before that, however, both the Minions and Gru plotlines pay dividends. Carrell’s younger Gru is more engaging than his older self, and pairing him with his idol Knuckles is vaguely sweet/touching in a “these bad guys are actually good guys”, Hollywood blurring the lines of morality so as to set us up for Luciferian transcendence, kind of way. They particularly bond over robbing the Bank of Evil.

Kevin, Stuart and Bob decide they’ll rescue Gru (who has ostensibly been kidnapped by Knuckles), with such incidents as commandeering a plane (you could do that in the ’70s) complete with Minion in drag, rolling down the streets of San Francisco and, during the grand climax, transforming into zodiac animals themselves, one of which is presumably a rooster, and yet fires eggs… and even has a Minion rooster/chicken baby. I don’t even want to speculate upon the ramifications of this, but it did make me laugh.

Even funnier is poor Otto setting off in hot pursuit of the stone (taken by RZA as an Easy Rider-esque biker), Otto being on a peddle car but going very very fast. Also in the cast are Russell Brand, or the former Russell Brand (whomever the Brand alike is now) and Julie Andrews, almost as old as Arkin and amusingly obstreperous as Gru’s mother. The soundtrack is expectedly replete with period tunes and new ones, so pop-functional but offering no surprises. I don’t profess to understand the #Gentleminons nonsense, but if it’s absurdist in nature, more power to them. If I were Illumination, I’d ditch the main “attraction” – DM4 is due in 2024 – and concentrate on the little fellows. They’re sooooooo funny!